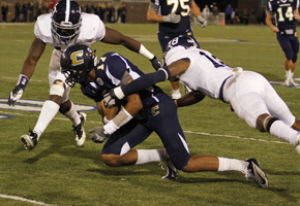 Head coach Jeff Monken and his Georgia Southern University Eagles pushed through a nail-biting triple overtime against the University of Tennessee at Chattanooga Mocs tonight, winning 39-31.

The battle between the two teams intensified after the fourth quarter ended with the score tied at 24. Both GSU quarterbacks junior Jerick McKinnon and Sophomore Ezayi Youyoute helped push their team to victory.

“This is what championship teams are made of. We knew we had a chance to bring out this victory and it was a good test for us,” senior back Darreion Robinson said.

The game went into its first overtime and GSU had the first opportunity to score. The Eagle’s 20-yard touchdown run from Robinson was the first to put points on the board. GSU freshman kicker Alex Hanks helped out by tacking on an extra point after Robinson’s score. The Mocs were able to answer with a touchdown pass of their own from freshman quarterback Jacob Huesman to sophomore tight end Faysal Shafaat.

In the second overtime, both teams were able to stop the other from scoring. The Mocs, however, were able to move their offense into field goal position on their possession. UTC’s kicker ended up kicking the ball wide right and was unable to convert the field goal successfully.

“I told my guys that if we could just hang on to the ball, we could make it,” Monken said.

In the third overtime, the Eagles started out with possession and were able to constantly convert on third down, putting them into the red-zone. GSU quarterback McKinnon was able to push through the line of scrimmage one yard to the endzone. McKinnon’s touchdown cranked GSU’s lead to 39-31.

After the score, the Eagle defense put a stop to Huesman and the UTC offense during their drive to end the game with a final score of 39-31.

“I’m proud of my team because we fought second by second and I’m proud to be an Eagle right now,” senior safety J.J. Wilcox said.