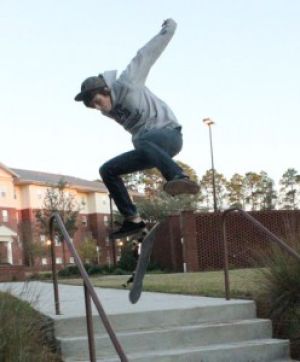 Phillip Stringer, former Georgia Southern University student, held a forum last night concerning his project to bring a commission free skate park to Statesboro and the progress he has made so far.

The project, which began last November, will take three years to complete. The first year is planning, the second year invested in raising awareness and the third year is when the building and designing takes place.

“I want to give someone something I never had,” Stringer said.

The process began the day after Thanksgiving of 2011 when Stringer sent out 430 emails to various student clubs and organizations on campus, receiving around 215 back with advice on how to go about his project.

Stringer will speak before the Statesboro City Council about his project in about a month and is currently ahead of schedule in the second year of the process.

The idea of having a skate park is not uncommon and in order to get the city’s approval, Stringer will need to present a package that will show how the community will get involved and he will need to provide a cost estimate, Allen Muldrew, executive director for Downtown Statesboro Development Authority, said.

The estimated cost would be $400,000, which would be allocated through various sources including grants, donations and fundraising, Stringer said.

Stringer asked for advice and guidance from contacts in Texas. Texas A&M University conducted a similar project about five years ago, and Stringer has been in contact with them on how to go about this long process.

He relies heavily on his advisors, which consist of GSU students.

Stringer has given speeches to various organizations around the city of Statesboro including the Boys and Girls Club, Kiwanis Club, Rotary Club and the Statesboro Police Department.

This project can potentially have a lasting impact on the Statesboro community, Patrick Grumbar, an undeclared sophomore, said.

“This would be life changing,” Grumbar said.

“There are so many people out here who get kicked out of everywhere, and the cops hassle you. If people really want to quit complaining and have their property not destroyed then give us a skate park and there will be no more complaints,” Grumbar said.

“Building a skate park would be better than most other things that you could build,”

Jack Bevivino, undeclared freshman, said. “People would come here if there were a skate park. It could be aesthetically pleasing places if you put it into a park — another reason to come to Statesboro.”