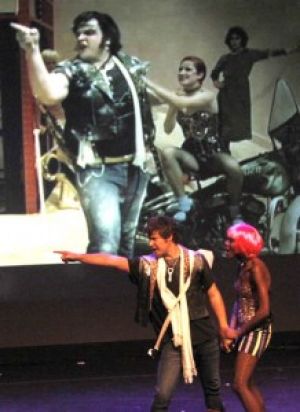 With just a jump to the left and then a step to the right, audience members got in touch with their wild side this past Thursday and Friday at the Averitt Center’s fifth annual production of The Rocky Horror Picture Show.

The show featured a shadow cast who performed while the movie played on screen and a round of games to break in “virgin” viewers who have never seen the show before the performance.

“They may be a little risqué, but it’s Rocky Horror,” Bob Peterson, director, said.

Leading up to the show all audience members also had the opportunity to participate in a costume contest, and the top winner was awarded a prize. All audience members were given prop bags with various items so they could play along with the shadow cast.

“It’s one of the best experiences of your life,” Anna Rhoden, sophomore biology major, said. “It’s an amazing sense of you can do anything, even the bits you try not to do in public, and be completely safe there because everyone is just as strange as you are.”

Afterward, a cast party was held across the street from the Averitt center at 40 East Grill.

“It was a great chance for the audience to meet the cast. It was nice for us to be able to unwind as a cast together,” Peterson said.

“It was really awesome. We made a lot of upgrades this year, and it really paid off,” Megan Bowen, the show’s choreographer, said.

The games change from year to year and are chosen with the hopes of getting the best reaction, Peterson said.

The production will change slightly from year to year as the group continues to make upgrades, Peterson said.

Depending on the show’s budget and potential funding they are hoping to add more props and continue to let the show grow.