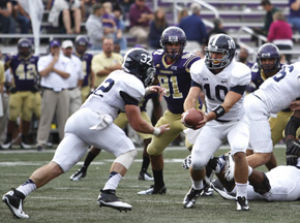 The Eagles traveled to the mountains of Cullowhee, N.C. where they played much more efficiently than last week, helping them take the 45-13 win against Western Carolina University.

GSU was 11 of 15 on third-down conversions during the game. A statistic much better than last week, where the Eagles went 0-10.

To go along with the efficient play on third-down, the Eagles picked up 33 first downs while WCU only managed 11.

Last week, the Eagles were able to win by going 0-10 on third-down, but that usually doesn’t happen with most teams.

The Catamounts were held to 2-10 on third-down and they were only able to manage a net gain of 207 yards, a more believable result of inefficiency on third-down.

Thanks to the efficiency with the ball, the Eagles ended the day rushing for 614 yards on WCU.

Sophomore quarterback Jerick McKinnon was also efficient in the passing game. He was 2 of 4 and his two completions accounted for two passing touchdowns.

The day ended with the Eagles on top. They will hope to continue the efficiency they have had as they face Wofford at home for Military Appreciation Day on Oct. 13.