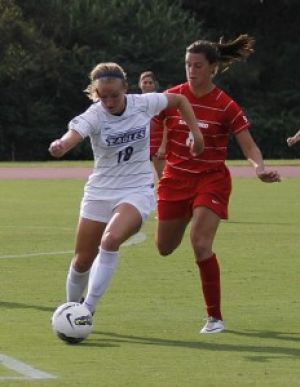 The Eagles were shut out by Appalachian State University 0-1 on Sept. 28 and recovered from their wounds to come out on top when contesting Western Carolina University on Sept. 30 to improve their Southern Conference record (2-2).

The Cougars are coming off of two losses, 1-2 against University of North Carolina-Greensboro, and they were shut out 0-2 against Elon University this past weekend, resulting in their SoCon record falling (2-2).

CofC overcame GSU 1-2 last year at Eagles Field.  According to the 2012 Women’s Soccer Preseason Coaches’ Poll, CofC is predicted to repeat their runner-up finish in the tournament last season, as second in league standings with 106 votes and one first place vote. Out of 12 teams in the SoCon, GSU was voted into seventh place in league with their 53 points.

The Eagles have produced a total of 19 goals this year from their 188 shot attempts, over the Cougars’ 10 cumulative goals out of 120 shot attempts.

GSU sophomore forward Sydnie Van Curen leads the pack offensively with five goals and one assist for the Eagles. Freshman midfielder Nora El-Shami has racked up 32 shots this season, more than anyone else on the team. El-Shami also follows right behind Van Curen with three goals and three assists, with her most recent action at the net was an assist to junior forward Alex Murphy in the victory over WCU.