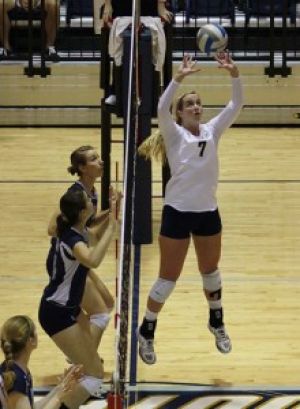 Van Dyke was named the Southern Conference Student-Athlete of the Week, and Bellissimo reached 1,000 digs for the Georgia Southern University’s volleyball team.

“I’m proud of them. They have done a great job for us for four years now. It’s nice to see them get some recognition for what they’ve done. They have done a lot for our program, and I have seen our program grow. We talk a lot about leaving our program in a better place than we found and those two are definitely doing that,” head coach Chad Callihan said.

On top of receiving the SoCon Student-Athlete of the Week, Van Dyke surpassed the GSU record for career assists, beating the score of 4,180 assists once held by Amanda Brooks. She finally passed this record at the beginning of this year in a match against Auburn University, in which she received 47 assists.

Not too long after, Van Dyke was named one of 30 volleyball candidates for the NCAA Senior CLASS award. To receive this award, one must excel in the four aspects of community, classroom, character and competition.

“I’m really excited to get the assist record. I’m so glad I’ve gotten to play here all four years and represent Georgia Southern. I really couldn’t have done it without my team, my passers giving me passes, and the hitters putting the balls away. I’m just so grateful I was given the opportunity to play here, to have played on the teams that I have and the great friendships I made, and how I have grown as a volleyball player,” Van Dyke said.

Bellissimo has earned 189 kills, 18 assists and 204 digs this year. At the game versus The Citadel, Bellissimo reached 1,000 digs in her career and received a gift with her photo on it, given by Callihan. During this game, she got eight digs, six kills, one assist and two serve aces.

Not including the milestone of 1,000 digs, Bellissimo has also had several notable accomplishments. She has played with GSU since she was a freshman and has been named to SoCon Academic Honor Roll every year. Bellissimo is positioned as an outside hitter but excels in all aspects of the game, specializing in her defensive game as her career has continued.

Bellissimo said, “I didn’t know I was even close to it. I didn’t even think about the statistics. It’s exciting. It’s cool to see everything you’ve worked for four years accumulated.”