Men’s soccer to face off against Mountaineers 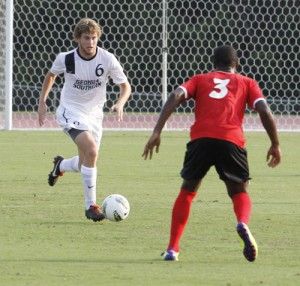 The Eagles have lost their last eight matchups with the most recent being a close 2-1 loss to Davidson College on Saturday.

The Mountaineers are nursing a five game losing streak having lost to conference foes College of Charleston 3-0 and University of North Carolina at Greensboro 1-0.

Eagles sophomore midfielder David Vargas Masis is on a hot streak having scored in two of the last three games.

The Mountaineers have won three of the last four meetings between both teams with the most recent result being a 2-1 victory in Statesboro.

This year both teams have played similar opponents this season, Wake Forest University and Gardner-Webb University, with both losing against Wake Forest, however GSU defeated GWU by a score of 2-0, while ASU lost in double overtime 3-2.

GSU has been good in the early parts of games scoring five times in the first half this season while giving up 14 goals in the final half of games.

ASU has been outscored in the first half of games by a total of 6-2 this year. The second half is a different story as they have scored six out of their eight goals in this time frame.

The game time for this matchup is set for 6 p.m. tonight at the Ted Mackorell Sports Complex in Boone, N.C.