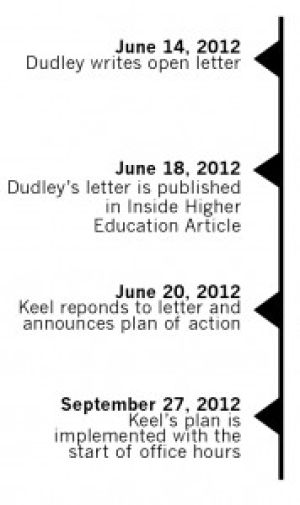 Thursday, Sept. 27, President Brooks Keel opened his door for faculty office hours for the first time since announcing in June his proposal for office hours after an open letter was published about the lack of communication between faculty members and administration.

On June 14, Dr. David Dudley, chair of the Department of Literature and Philosophy, sent an open letter recounting the flaws he saw with administrative policies at Georgia Southern University. The letter began as an invitation for dialogue across campus but soon spread nationwide.

Moore’s office hours appointment with Keel is set for Nov.

“A lot of the frustration that I think we’re seeing among everybody, faculty and staff, is due to a lack of understanding of what the issues are,” Keel said.

There have been positive changes in communication, but it is still in the early stages, Keel said.

“You fix it by listening. These problems can be fixed,” Paul Michaud, associate vice president for Human Resources, said.

Dudley wrote the letter in response to a Faculty/Senate meeting this summer after witnessing the separation between faculty members and the administration.

“If it matters, let your voice be heard.  And a lot of people aren’t. When we don’t let our voices be heard, we might have well have given up. I can’t, and I won’t,” Dudley said.

“The president’s goal is to make Georgia Southern bigger. His opinion is that bigger is better, but it might mean sacrifice,” Moore said.

“All the power is at the top, and I have no trust for a system with no checks and balances,” Dudley said.

Dudley said that the administration is overlooking a lot of smaller problems, such as vomit stains inside the Newton Building.

Dudley said, “Do you see this vomit? It’s been here for a week, but at least we’ll have a bigger football team.”