Eagles rack up sixth win in a row 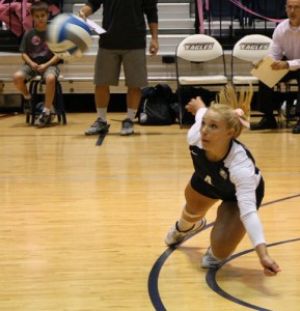 The Georgia Southern University volleyball team continues its four-match winning streak with two away matches against Samford University winning 3-2 and University of Tennessee at Chattanooga winning 3-0.

This is the second five-set match the Eagles have won after having lost eight consecutive five-set matches previously. This win was also a big match for the Eagles because coming into the match GSU knew SU was the North Division leader and the defending league champion.

Several of the Eagles stepped up during this match and posted large numbers for GSU.

This victory gave GSU the momentum to sweep UTC at their court with set scores of 25-14, 26-24 and 25-23. This win was the sixth win in a row for the Eagles and head coach Chad Callihan’s 100th win in his five years at GSU.

Sophomore middle blocker Kym Coley dominated up at the net with a total of 14 kills in 21 swings, giving her .667 hitting percentage and three blocks as well. Alongside of her, Curry had eight kills and three blocks.

The Eagles will finish their four road swing this coming weekend at College of Charleston on Friday at 7 p.m. and at The Citadel on Saturday at 6 p.m.