The Eagles look to take down No. 1 in SoCon 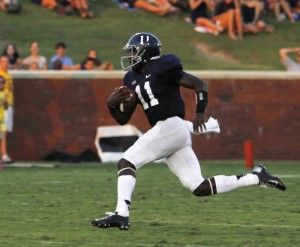 Photo by: Lindsay Hartmann/Sophmore quarterback Ezayi Youyoute (11) carries the ball for an Eagles first down against Elon University.

Head Coach Jeff Monken and his Georgia Southern University Eagles will look to keep the momentum from the win against Elon University going this weekend against Samford University.

The Bulldogs are coming off of a win similar to that of the Eagle’s over the weekend. Samford defeated the University of Western Carolina Catamounts 25-21 while GSU won by a hair against the Elon University Phoenix 26-23.

Samford sits at the top of the Southern Conference rankings after winning all four regular season games, two of which are SoCon matches. The Eagles lost their spot quickly after the Citadel upset a few weeks ago, and now they stand in the No. 4 spot in the SoCon.

The Eagles will face a team with a different quarterback from last season, senior Andy Summerlin, who is still capable of putting up similar numbers. The Bulldogs had quarterback Dustin Taliaferro who put up three times the amount of completions and attempts than GSU’s former quarterback Jaybo Shaw.

However, now that Samford has Summerlin, the Eagles have a new focus for this match up. Summerlin, in 2011, completed 49 of 94 passes for a total of 469 yards. This season so far he has completed 89 of 129 passes for 817 total yards and four touchdowns. His longest pass so far was for 51 yards.

Although Samford recorded more passing yardage than GSU with 277-95 yards, in 2011, the Eagles out-rushed the Bulldogs 263 to 61 yards.

For this matchup, not only will the Eagles have to look out again for their opponents’ aerial attacks offensively, but they will also have to keep an eye on the ground for rushing.