Eagles move record to 1-1-0 in the SoCon 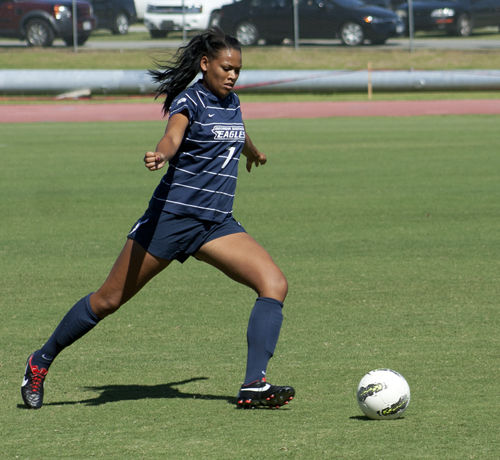 Photo by: Demario Cullars/Senior, defender Zoe Van Gorder (7) kicks the ball away from the Eagles goal to prevent UTC from scoring on Sept. 23, 2012. Eagles won 5-0.

Georgia Southern University’s women’s soccer hosted two games this weekend and were defeated 1-2 by Samford University and won by a 5-0 landslide against the University of Tennessee at Chattanooga.

SU scored the first goal of the game off of a corner kick assist in the 10th minute of the game.

Freshman midfielder Nora El-Shami took a penalty kick played to heads in the six-yard box, which assisted senior defender Zoe Van Gorder with a goal in the last minute of the first half to tie up the game.

“She plays the best balls in. We both kind of knew when she went up there. She bent it perfectly, and I just kind of held off my defender a little bit and just tried to look it into the goal. It was great and definitely credit to her,” said Van Gorder.

This goal gave the team more drive to keep performing well, but they missed opportunities and passes that would have changed the outcome of the game.

“To go down a goal, and to get one back, right before the half with time pretty much expiring was good momentum to push us into the second half. It’s always a good team effort. I am never disappointed with our team’s effort. I always feel like they work their butts off and give 100%. It’s just the miscues and missed connections that we need to fix, “said head coach Lindsey Vanderspigel.

In the 68th minute, SU broke through the middle and scored to take the lead making this the second game GSU has lost this season.

After their defeat to SU earlier in the weekend, the Eagles came back fighting to defend their home field with well-crafted shots against UTC, improving their record to 5-2-3.

“We had a hard-fought loss on Friday and to come back with resilience, and to certainly put the ball in the back of the net is always nice. A good team performance all around, with some really, really great finishes. Stephanie Gratto and Sydnie Van Curen had two beautiful finishes along with the other three. I am pleased,” said Vanderspigel.

Many players stepped up during the UTC game after they became comfortable the longer they remained in possession on the opponents half of the field.

“Today we did a good job of having that possession in the attacking third which creates more opportunities for us. We’ve been stressing it to the team this past week of making sure of our attackers take players on more and more. I think they are starting to be more comfortable in those roles,” said Vanderspigel.

Freshman forward Nora El-Shami scored the first point for GSU unassisted in the 15th minute 22 yards from the goal.

“It’s been a little while since I got one so, it felt really good,” said El-Shami

Freshman forward Emily Hirano increased the lead to 2-0 when she scored in the 23rd minute assisted by junior midfielder Mckenna Storey’s toss into the edge of the field, 18 yards from the goal. The toss was accepted by a header from junior forward Alex Murphy who also assisted Hirano’s goal.

Sophomore forward Sydnie Van Curen played a penalty shot to the feet of freshman midfielder Stephanie Gratto who placed the ball in the back of the net, giving the Eagles a dominating lead.

Van Curen made her fourth goal of the season in the 72nd minute of the game, bringing the score to 5-0. She volleyed a goal in from a corner kick assist by senior midfielder Carlee Storey.

“I had been trying to volley it all day, and every time it just wasn’t going in, but finally I got it. It’s always nice to be the leading scorer so I’m trying to stay at that,” said Van Curen.