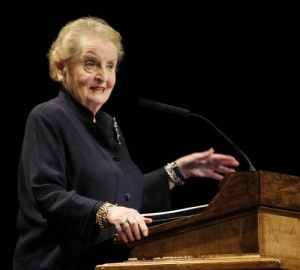 Hanner Fieldhouse was filled with faculty and students Tuesday night as the former first female U.S. Secretary of State Madeleine Albright discussed leadership and women in the work force.

“One thing we learn from experience is that you can be completely sure of something and at the same time be completely wrong,” Albright said. “Bigotry and contempt must be taught, and the attitudes are often treated as truth. Certainty and truth do not always go hand in hand.”

In some countries schools teach that their culture is without blemish and that other cultures are inferior, along with regular studies, Albright said.

Albright went on to talk about opposing viewpoints, and that we should not be divided by different opinions, but should use them as a platform for discussion.

“The challenge for our leaders is not to make everyone think the same, but to unite us in our differences,” Albright said.

Jennifer Hendrix, budget analyst for the Office of Student Activities, asked Albright to give advice to women who are trying to balance their home and work activities.

“It’s just a matter of figuring out what works for your family, your conscience and your interests,” Albright said.

“The only word I can apply to all women is choice,” Albright said. “Every woman should be allowed to choose and have that choice respected.”

Colleen McNally, a junior journalism major, asked what Albright’s favorite pin is, and the symbolism it holds.

Albright has been known over the years to wear decorative pins when speaking at public venues.

“I have a lot of great pins, but I have two favorites. I have a ceramic heart that my daughter made when she was five. The other one is what I call the Katrina Pin,” Albright said.

The Katrina Pin was given to her at the World War II memorial in Washington D.C. by a man whose mother had died in New Orleans during hurricane Katrina. Her husband, on their 60th wedding anniversary, gave the pin to the man’s mother.

“I’ve taken a lot from this. One quote that I’m going to put on my Facebook page later tonight is ‘Opinions should be used to start conversations, not end them,” Deal said.

“She used strong comedic elements, and she definitely made sure to talk nice about GSU,” Michael Lauer, senior multimedia communications major, said.

Eric Smith, senior biology major, said, “I didn’t go. I know who she is, I respect who she is, but I decided that I wasn’t going to hear anything terribly controversial.”