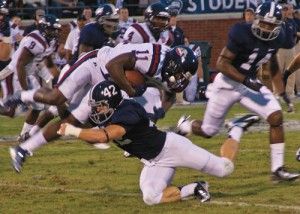 Third-down is important for any defense because it disrupts the offense’s rhythm and gets them off the field.

The defense for the Georgia Southern University football team was able to buckle down on crucial third-downs in their own territory.

In the first half, Samford University was able to convert on 6 of 12 third-downs and move the ball effectively but was unable to truly punish the Eagles on the scoreboard scoring only 10 points.

In the second half, the Eagles’ defense put a stranglehold on the Bulldogs’ offense.

SU went 0-4 on third-down conversions in the third quarter and it caused their offense to look out of sync and as a result, the offense was held scoreless.

When a defense is able to force 3-and-outs and quickly end drives, the players are able to get valuable rest on the sidelines.

“I feel it in my legs,” senior defensive tackle Brent Russell said. “When we 3-and-out them and our offense and has long drives, we feel fresh, we hardly get tired at all and we play like it.”

In the fourth quarter, SU threatened to score while inside the 5-yard line and the GSU defense was able to stop them and force a turnover on downs.

Late in the fourth with GSU up 28-16, junior defensive end Terico Agnew sacked Andy Summerlin on third-down to essentially ice the victory for the Eagles.