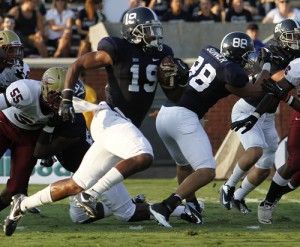 Photo by: Lindsay Hartmann/Senior safety J.J. Wilcox sprints down field from catching a kick off from Elon. Wilcox returned the kick 29 yards to the Elon 38 yard line.

The Georgia Southern University Eagle football team barely snuck away with a win as they defeated the Elon University Phoenix 26-23 this Saturday.

“I didn’t expect this much of a dog fight. It’s frustrating,” Head Coach Jeff Monken said.

The Eagles won the coin toss but deferred possession until the second half. They kicked off to Elon, which landed at the EU 25 yard-line. Both teams were able to put points up on the score board in the first half.

The Phoenix out scored the Eagles in the first half and was able to chalk up two successful field goals and one touchdown. The touchdown by EU was influenced by one of the many first-half fumbles that the Eagles committed. At the end of the half, the Eagles found themselves behind the Phoenix 6-13.

After halftime and a talk from Monken in the locker room, the Eagles came out focused on another win. The Eagles scored immediately with junior slot Jonathan Bryant who ran a 78-yard touchdown with 13:59 left in the third. The Eagles kicked and converted the point after making the score 13-13.

“I can’t repeat what I said to them in the locker room because I was frustrated and mad, but thankfully we didn’t have to suffer what we went through two weeks ago,” Monken said.

With the third and fourth quarters being crucial minutes for EU and GSU, both teams were eager to finish strong. The Eagles were later able to outscore the Phoenix by a small margin. GSU recorded two field goals and one touchdown while the Phoenix fell short one field goal.

“Our defense did a really good job stuffing their sweep offense,” said Monken.

When the Eagles saw that they were ahead, Youyoute took a knee under the two-minute marker to run the clock down, winning the game for GSU. The final score was GSU 26 EU 23.