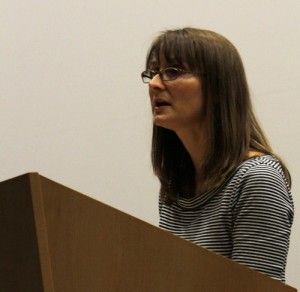 Audience members were taken away by the words of author Eleanor Henderson yesterday evening as she read excerpts from her first novel, Ten Thousand Saints.

Eric Nelson, professor of Writing and Linguistics who invited Henderson to read, said the book is a traditional coming of age story. Nelson said the story was set to a punk rock age in New York during the 80s.

“I think she has the amazing ability to create a number of characters and keep them all in motion over a long period of time,” Nelson said.

Aside from being a story about the coming of age, Henderson also incorporates family into her work Ten Thousand Saints.

Nelson said he read the author’s work two times before inviting her to read because he enjoyed her writing.

“She actually painted a very vivid picture of the 1980s with her book Ten Thousand Saints,” Allen said.

Others in the audience found Henderson’s reading to be fantastic and an example for their own writings.

“It’s always better to hear the author’s point of view on their own work so you feel like you get to know it more intimately,” Jackson Sharpe, senior writing and linguistics and Spanish major, said.

Outside of her first novel, Henderson also read from her work in progress.  Henderson said she wanted to read it in front of a live audience.

After Henderson gave the audience a glimpse into her second work, she left some time for a short question and answer session.

Some in the audience said they like to see things like this on campus available for students and those in the community.

Sharpe said he is encouraged when writers come to visit and he gets the chance to speak to them and have questions answered.

Sharpe said, “It makes me feel like I can connect myself from here to the future where I’m possibly a writer and maybe doing something like this.”