The Eagles look for first road win at Jacksonville 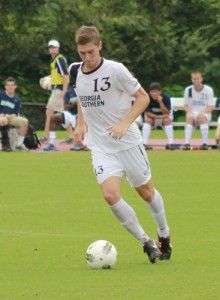 Junior midfielder Hunter Norton (13) dribbles the ball down the field toward the Eagles goal.

This Saturday Georgia Southern University men’s soccer (2-5) looks to snap their four game losing streak when they travel to Florida to take on Jacksonville University Ospreys (0-6-1).

This game will be the third of seven straight road games that GSU will have to play before their next home match. Away matches have not been kind to the Eagles, as they have lost all four of the games they have played on the road.

JU on the other hand has not won a game at home this year to put them at 0-4 at games they play in friendly confines.

Offensively GSU has struggled lately and have made a total of four goals in the past four games. The good news is that the offensive attacking and philosophy have been there, however the end result and finishing of the goal have not.

The Eagles take on a JU defense that has allowed 14 goals this year in the seven games they have played in. GSU needs to get their offense going early as opponents have outscored JU by a total of five goals compared to zero goals scored in the first half for the Ospreys.

Defensively GSU has given up a total of 15 goals in a span of seven games. The Eagles have one victory when they give up two goals or more. It will be key that they limit the amount of opportunities and shots that JU takes.

JU has scored a total of three goals this season with all of them coming in the second half.  Two of the three goals this year have come from junior midfielder Nick Rodriguez.  Rodriguez should be the main focus of the Eagles defense, and if GSU can hold him scoreless that would alleviate any pressure offensively from JU.

The key point in this game is that GSU does not have a true road win yet this season. If GSU can put together a full 90 minutes of play, they could record their first win on the road. With four more road games after this one, a win could carry some momentum for the rest of the road trip.

GSU gets their first road win over a winless JU team by the score of 2-1.