The Eagles defeat the Bulldogs, 35-16 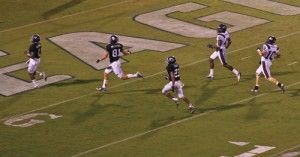 Photo by: Demario Cullars/Junior Jerick Mckinnon (1) scores a touchdown to keep the eagles in the lead.

Eagles settle during fourth quarter and take the win

The first drive of the fourth quarter belonged to Samford. It is apparent that they felt the pressure of playing from behind since they started completing spectacular catches down the field. With 9:17 to go in the game, the Samford offense faced a crucial 4th and 1 from the GSU 5-yard line. Instead of taking the field goal, the Bulldogs elected to go for it.

Samford star running-back, Fabian Truss, took the ball up the middle but Darius Eubanks and the Eagle defense were waiting for him. The Eagles made this huge defensive stop after sustaining a 10-play, 77 yard, 5:02 minute long drive by the Bulldogs.

During the next possesion for the Eagles, Jerick McKinnon completed a 34-yard pass to tight end Tyler Sumner. Shortly after the Eagles faced another 3rd and 5 that they failed to convert. The Eagles were forced to punt and the Bulldogs were given the ball on their own nine yard line with 4:39 remaining in the game.

The Eagle defense continued to put pressure on the Samford defense. With 3:09 to go in the game, on a 3rd and 10, GSU sacked Summerlin thanks to the help of defensive ends Terico Agnew and Dion Dubose.

To add insult to injury, with 1:30 to go in the game, Swope added another touchdown from 40 yards out to bring the score to 35-16.

The Bulldogs almost scored at the end but failed to do anything with the ball after having the ball on the GSU 1-yard line with 21 seconds to go in the game. They could not make it to the endzone and the score was settled at 35-16.

To highlight some of the important stats in the game, The Eagles ran the ball well, yet again. Jerick McKinnon, who played quarterback since the 2nd quarter, ran the ball 13 times for 162 yards and two touchdowns. Swope also had a good game with two touchdowns and 133 yards off 21 carries.

After halftime, the Eagles and the Bulldogs traded possessions as they played through the rain, neither of them were able to pick up a first down.

The Eagles continued to struggle on third down so instead, they went for a 4th and 2 on the Samford 38 yardline. The gamble was successful as Dominique Swope converted it with a 20-yard rush.

Unfortunately for the Eagles, they fumbled on the following play and Samford safety Jaquiski Tartt, who recovered the fumble, returned it 80 yards. Samford missed the following 2-point conversion and the score was settled at 21-16.

Yet again, the Eagles answered. Senior safety JJ Wilcox returned the following kickoff 33 yards to start the drive at the Eagle 33-yard line. The following play, McKinnon found a hole in the Bulldog defense and ran 67 yards for his second touchdown of the game with 5:40 to go in the third.

Samford settled in during their first drive of the second quarter as they gained rhythm from their balanced offensive attack. Samford quarterback Andy Summerlin was sacked to start the drive but during the following 3rd and 13, Summerlin connected with Chris Cephus for 41 yards which put the Bulldogs on the Eagle 14-yard line.

After a 41-yard completion from Samford quarterback Andy Summerlin that put the Bulldogs in the red zone, Summerlin was able to connect with Kelsey Pope on a third an goal where it appeared the Eagle defense was expecting a run.

With the Bulldogs up 10-7 after their 8-play, 2:18 minute drive, the Eagles responded quickly with a touchdown of their own after a drive that lasted 1:19 minutes.

The Eagles responded with a four play, 75-yard drive, capped off by a 41-yard touchdown run by junior B-Back Jerick McKinnon. This put the Eagles back on top, 14-10 with 10:28 to go in the half.

Both teams were pushing the ball down the field well until the Eagles finally stopped the Bulldogs on a 3rd and 8 from the Eagle 38-yard line. The Bulldogs punted through the endzone and the Eagles started their second drive of the quarter on their own 20-yard line with 7:37 to go in the half.

From there, the Eagles also started to struggle on offense. During a 3rd and 21, McKinnon, who was playing quarterback, was able to avoid a sack but then threw an interception to Samford safety Trey Wesley on the 50-yard line, who returned it to the Georgia Southern 40-yard line.

Again, the Eagles were able to almost instantly able to respond. Within three plays, on a Samford 3rd and 6, Andy Summerlin’s pass was intercepted by GSU corner Lavelle Westbrooks, who ran it 72-yards for a touchdown. The Eagles expanded their lead 21-10 with 4:09 to go in the half.

The Bulldogs did not respond well. They weren’t able to gain any yards on their next possession. The next drive did not result well for the Eagles, after a 10-yard block in the back penalty, the Eagles were stopped on a 3rd and 21.

The only break for the Eagles came off a 49-yard punt by freshman punter Luke Cherry to give the ball to the Bulldogs on the 20-yard line with 39 seconds to go in the half. The Bulldogs weren’t able to do anything with the ball and the Eagles headed into the locker room after Eagle defensive end Josh Gebhardt sacked Summerlin.

Eagles up early against aggressive Bulldogs

The Bulldogs started the day with a very balanced play selection….After a quick first down, the Eagles dug their feet into the turf and forced a false start on the Bulldog offense during a third down. The Bulldog drive ended on their 31-yard line as they were forced to punt.

The Eagle defense was effective on third down until Samford settled into the game on their third drive of the game. The Bulldogs ate up 5:12 of the clock running 13 plays for 63 yards. The Eagles stopped the Bulldogs on a third and three from the four-yard line so the drive resulted in a field goal and the score was settled at 7-3 by the end of the quarter.