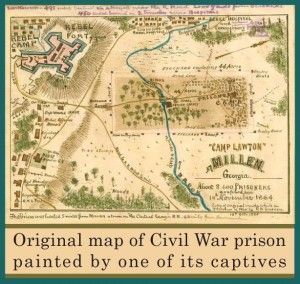 On Oct. 1, the Public Broadcasting Service will come to the site of Camp Lawton to film a documentary on the nationally recognized Civil War camp with artifacts found by many Georgia Southern University students.

Camp Lawton, a Civil War prisoner of war camp at nearby Magnolia Springs State Park, is a project that GSU’s Department of Anthropology and Sociology has been undertaking for the past three years.

“The students are the key to the work being done at Camp Lawton,” Kevin Chapman, graduate supervisor for the Camp Lawton/Magnolia Springs project, said.

Chapman is an archeological technician who, after discovering the first artifact, knew this camp had the potential to hold numerous pieces of importance. He now oversees GSU research as the Graduate Supervisor.

PBS will be bringing a crew of 40 production staff and scientists to create the documentary, “Time Team America.” It will jumpstart research that the Department of Anthropology has wanted to perform.

“Because we have a lot more people, we can do a lot more in a shorter amount of time,” Dr. Lance Greene, assistant professor in the Department of Anthropology, said.

This addition of technology will be made available to undergraduate anthropology majors who show interest and are ready to work with these professional instruments.

Josh Mackrill, sophomore anthropology major, is not intimated by using the new technology.

“I’m excited that we get to use this new technology. That’s something that I am so very happy about,” Mackrill said.

If students are not ready to use high tech equipment there is still a place for them in writing Camp Lawton history.

Kaitlynn Ball, junior anthropology major, is in charge of organizing student volunteers who will be able to experience traditional excavating and perform metal detection surveys.

“We have about 15 volunteers planned for each day,” Ball said.

Though the addition of PBS will benefit research, it may pose problems with the logistics the anthropology students have single handedly planned.

“The hardest part in my mind is meshing the science with the production.  They want to do a TV show about science, while we are doing science and letting them film us,” Chapman said.

The GSU community hopes that the PBS documentary will not only show the research performed at Camp Lawton but will also bring awareness to the cultural impact Camp Lawton has on the Statesboro and GSU communities.

“When news about Camp Lawton hit, it really was world news,” Chapman said. “It really has a national scope. There is a good chance that if someone had an ancestor in the Civil War that that person was either in Camp Lawton or had been involved with Camp Lawton.”