Eagles take on Blue Hose on the road 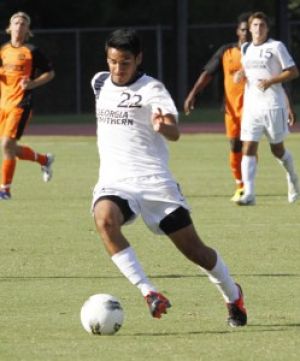 Tomorrow the Georgia Southern University men’s soccer team (2-6) will take on the Presbyterian College Blue Hose (1-7) in a matchup of two teams looking to break their losing streaks.

The Eagles come into the game on a five-game losing streak with their latest result a 5-0 defeat at the hands of Jacksonville University.

The Blue Hose have lost six of their last seven matches with Davidson College defeating them 3-0 in the most recent contest.

GSU has not been successful on the road this year having lost all four games they have played away from Eagle Field.

PC has won only once in four chances at home this season, and have dropped the last two home games.

GSU has had some trouble finding offense, as they have been shutout on three separate occasions this year, and only scored one goal in the past four matches.

GSU takes on a Blue Hose squad that has allowed a total of 15 goals in their past six games and have given up more than two goals in all but two games this year.

Defensively, GSU has not played up to its potential giving up over three goals per game they play on the road this year. The Eagles have also given up a total of 11 goals in the past three matches.

However the Eagles face a PC team that has scored a grand total of three goals all year. The Blue Hose have yet to score a goal in the first half all season.

This game has meaningful impact because Presbyterian College has already played Davidson and Furman, two Southern Conference opponents that GSU will have to faceoff against later this season.

Although PC lost to both of the two opponents by a score of 3-0 each, this match will allow the Eagles to see where it is as a team as they near SoCon play.