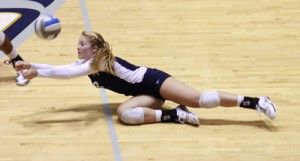 Freshman libero Alexandra Beecher dives to save GSU a point and get a step closer to SoCon Freshman of the Week.

Georgia Southern University’s Alexandra Beecher has started out her first season with the award of the Defensive Player of the Week, followed by the Southern Conference volleyball Freshman of the Week award.

Beecher’s Freshman of the Week award was due to her performance in the SpringHill Suites Eagle Invitational. When deciding the winner of this award, the overall performance of the player was analyzed in all aspects.

Throughout the four games of the invitational GSU played, Beecher had 10 service aces, a total of 81 digs, averaging 5.06 digs per game, and 12 assists.

“I’m not letting (the awards) get to my head. I’m just trying to do my best. It is very flattering and such an honor to win these things, but I am not trying to make myself over confident. I just want to keep pushing and keep myself humble, so I can fight as hard as everyone else,” Beecher said.

Overall, Beecher has the leading role in digs with 265 in the season so far and posted a match high of 23 digs in her last game against Jacksonville University.

“We’ve been really pleased with our defense this year.  She has definitely added to the ability to keep the rallies extended and give us more opportunities to score, and that is the ultimate goal, point scoring opportunities, and we have given ourselves more opportunities to do that. It was a good weekend for her, and we are proud of her for the accolades, and we hope that she just continues to get better,” GSU volleyball Head Coach Chad Callihan said.

Beecher success started in her hometown, Orlando, Fla., at Bishop Moore High School. During her seasons there, she lettered and earned a position on the All-Central Florida Top Team as well as being voted the best libero in Central Florida.

“It’s so exciting because as a freshman you never know if you’re going to earn that spot, and I’ve worked really hard, so I feel really accomplished. Its been awesome I love playing with this team. They have helped me so much,” Beecher said.