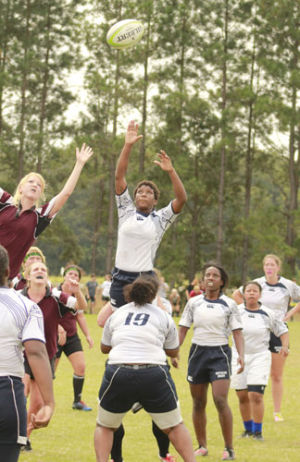 GSU played a tough game against Charleston, but in the end the away team came out ahead. GSU has a very inexperienced team, with this being the rookie season for seven out of twenty of the team’s players.

This semester is the preseason for club rugby.

“Fall is a social season, which is just to get the new players acquainted with the game and to get them to learn the rules and how to play,” said Mitch Buck, a GSU alumni who played club rugby for four years as a student. “Then in the spring is the Matrix season, when you can work towards playoffs or going to AllSouth.”

There are a few veteran players on the team, such as Junior Dual History and Spanish major Morgan Koon.

“When I first started my freshman year, we weren’t anything like the team we are today.” Koon said. “We do a lot of coaching clinics and referee clinics to make sure our team knows the game better.”

There is no coach for the women’s club rugby team, so they have to learn from other experienced players, such as the Men’s Rugby team.

“They come out to our practices, and have really helped us to expand,” Koon said.

Another source of experience comes from the referees, such as Bill Gillis from the South East Rugby Referee Society. Saturday’s match featured a shorter length than the usual 40-minute halves, so that Gillis could run an exhibition game to help teach the inexperienced players.

Gillis has refereed rugby for twelve years now. “The biggest difference between men’s and women’s rugby is that men have a lot of bad habits from American Football. Women don’t have that.  So when you watch a women’s game, even though it’s slower, their game appears a lot purer to the spirit of rugby.” Said Gillis.

The team hopes to cash in on the extra help, with plans of repeating, or even exceeding, the success of last season.

“Last year we actually won a lot of tournaments and I think we placed third in our conference,” Koon said. “And we actually just beat Clemson, one of our biggest rivals, last weekend 55-15. So I have a lot of great promise for our team this year. I think we will do really well.”