Payne in the Pros 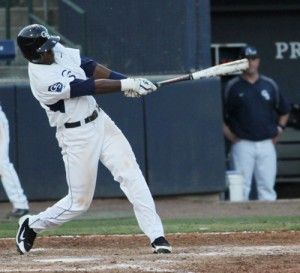 Payne spent his junior and senior year under the Eagles after transferring from Middle Georgia College and was drafted his junior year to the Kansas City Royals but decided to return to college shorty afterward.

“I was drafted my junior year, but I wanted to come back to Georgia Southern to get closer to my degree, and it was an honor to be drafted, and I’m thankful for the opportunity to take my career to the next level,” Payne said.

“I was very excited for him because I know how hard he worked to get to where he was,” GSU baseball Head Coach Rodney Hennon said. “Also to even pass up the opportunity as a junior was a big decision, but it gave him the chance to improve his draft status.”

“Shawn was an outstanding player and awfully fun to watch especially with his speed,” Hennon said.

This week, Payne started the instructional league, which lasts from Sept. 18 through Oct. 18 in order to stay sharp for the off-season.

“I was invited to the instructional league to help get better, and that lasts a month, and then pre training starts in March for the beginning of the season in April,” Payne said.

Since the season was already underway when Payne began his rookie year with the Green Jackets in summer of 2011, there were many things he had to get adjusted to.

“Coming in in a short season, I had to establish myself if I wanted to keep getting opportunities to play,” Payne said.

Payne soon started settling down with his position and began to rack up on his achievements and milestones with the Green Jackets.

“I hit over 300 at the end of the year and my on-base percentage was over 400 so, if you keep doing that, you’ll end up in the majors fast,” Payne said.

With Payne playing a complete full season from April through Sept. with the Green Jackets, he had plenty of opportunities to add to his collection of accomplishments.

Payne was named the South Atlantic League Post Season All-Star 2012 for Low A, reached second in the league for stolen bases for Low A with 53 for 56 in 2012 and racked up 34 straight stolen bags in 2012, which is the best in the major and minor leagues.

After his regular season, Payne was also promoted to the High A San Jose Giants to help the team compete in the playoffs.

Payne hopes to work his way through the minor leagues and reach the majors to the San Francisco Giants and make the Eagle Nation proud.

“I just wanted to reach back to the community and let everyone know how and what I’m doing, and that I am doing something positive post college,” Payne said.