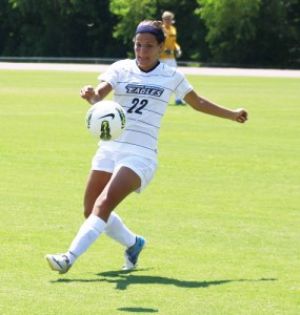 Georgia Southern University’s women’s soccer team will be hosting Samford University on Friday at 4 p.m. and University of Tennessee at Chattanooga on Sunday at 2 p.m.

The Eagles have a good standing so far with their current record of 4-1-3. The SU Bulldogs have lost more games than they’ve won this year with 3-5 record. The UTC Mocks are at a current of standing of 2-3-1, which leaves the Eagles as the highest ranked out the three teams so far for this season.

“Every point matters with only eight teams making the conference tournament every year. Four teams get left out in the cold, so you want to make sure that you take care of every single game. Out of all 11 games, you got to make sure you get your points in,” head coach Lindsey Vanderspiegel said.

All week the team is focusing on preparation and learning what to expect from SU and UTC.

“We are preparing to face both conference opponents, starting to watch the films on both of them and making sure we prep the team, so we know what to expect from both sides. We feel ready,” Vanderspiegel said.

SU had an exceptional record last year, which makes this game a much-anticipated rivalry. UTC has history of being a talented team, but last season they didn’t do as well.

“Samford is very good. Last year, they ran the table and didn’t have a loss and went all the way to the NCAA tournament. Chattanooga didn’t have as good a season as maybe they can. They are both good teams, and they should provide a pretty good test,” Brian Dunleavy, assistant coach, said.

Vanderspiegel has assurance from the team’s current record the players’ performances on the field with only one loss.

”It’s nice to come out in the non-conference play and get a bit of confidence. We would have liked to have a few more wins as opposed to what turned out to be ties. It’s nice going into conference play with only one loss,” Vanderspiegel said.

Dunleavy shows pride from the Eagles’ performance this season.

“It’s been very good so far. We are done with non-conference, and it was a close game that loss. We’ve got to be proud to a certain extent of the record. I think as a team we are trying to measure ourselves to a level of performance, and I feel like we’ve done that in the majority of the games, so I think that’s more important,” Dunleavy said.

The Eagles are to face vicious opponents this weekend but gives them the opportunity to obtain two wins to get a possible six points.

“Any weekend you go into this conference playing two games in one weekend, if you come off with two wins that’s massive. So, that’s the goal every time we play, but realistic expectations we need to perform on Friday and get ready for Chattanooga after that,” Dunleavy said.

On the other side of opportunity there is risk of defeat against SU and UTC. This would put the team in a tough position and would require a lot more focus to catch back up.

“There’s going to be ups and downs for teams throughout the next five weeks or so, but we want to make sure that we get a strong footing so start at the top of the conference,” Vanderspiegel said.

Dunleavy said, “A good thing about the conference is that we play 11 games, so there are opportunities for you to get back into it. So, starting off poor doesn’t mean they will finish off poor but, you got to do the things along the way to make sure you take care of yourselves as a team cause it’s a quick turn around.”