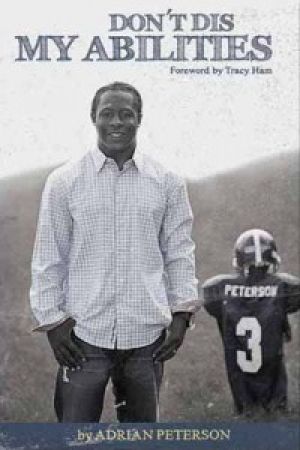 Georgia Southern University alumni Adrian Peterson, the NCAA’s Division 1 all-time rushing leader, will be signing copies of his new autobiography Don’t Dis My Abilities at The University Store this Friday and Saturday.

Peterson’s book talks about his hard work and success as a football player, as well as his current difficulty with a speech impediment and infant daughter’s medical issues. Chuck Dipolito, assistant manager at the University Store, said Peterson will be signing copies Friday from 4-6 p.m. and Saturday from 1-3 p.m.

The book is set to release on Sept. 28. Pre-orders are available exclusively through the University Store for $23.95 for the first month of its release.

“We can’t guarantee he will sign your book, but we can guarantee anyone that pre-orders the book will have a copy, guaranteed,” Dipolito said.

Peterson will be accompanied by teammates from the 2000 National Championship team at the book signing. Also in attendance will be Tracy Ham, another two time National Champion from GSU. Ham and Peterson are the only two eagles to ever have their jerseys retired in GSU history.

Peterson played for four years as an Eagle and each of those years he was a consensus All-American. He became the first sophomore to win the Walter Payton Award and won two National Championships in 1999 and 2000.

Peterson’s weekend in Statesboro will wrap up at the football game against Samford University, where at halftime he will be recognized as a GSU Athletics Hall of Fame inductee.

Many Eagles remember Peterson, or “A.P.,” by his iconic play nicknamed “The Run” against Youngstown State in the 1999 National Championship game. He ended his career at GSU with 7,590 rushing yards and 93 touchdowns.

After graduating, Peterson was drafted by the Chicago Bears in the sixth round, where he played for eight years, including the 2006 NFC Championship season and Super Bowl XLI, and ran for over 1,200 yards in his career.