Taking it to the streets: Alcohol consumption discussed for downtown area 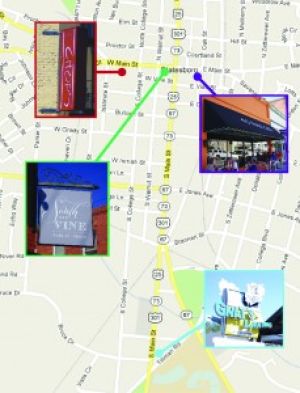 The permits would allow open container, in conjunction with bars and restaurants, on South Main St., West Main St., East Main St. and Vine St. during designated events as a promotional tool to attract higher volumes of customers to the surrounding businesses.

“It is something that has been discussed for appropriate times like First Friday,” Allen Muldrew, director of Downtown Statesboro Development Authority, said.

The conversation has begun, but finalizing the details won’t take place until the end of this year, Muldrew said.

“It is subject to how the conversation goes. It’s a possibility that this would be something our merchants would want,” Muldrew said. “We want to see who would oppose this and who supports this.”

“Personally I’m all for it. I’d like to get my doors open before I put my opinion for my business out there but this would encourage people to come downtown and create a more vibrant atmosphere,” Seni Alabi-isama, owner of South and Vine Public House, said.

A new scene is emerging in the downtown area, and Statesboro needs something new like a barhopping scene besides the area next to the dorms, Emily Glass, senior public relations major and former intern at the Downtown Development Authority, said.

The regulation of alcoholic consumption outside of the restaurants will not be controlled by the city, Muldrew said.

“They are trying to see how to make money and keep the drinking contained inside the parameters of the downtown area,” Glass said.

“This is not something the city or downtown would regulate. We would regulate it through the restaurants who want to work with this,” Muldrew said.

A new bar scene in the downtown area has slowly emerged as the DDA pushes for new restaurants and special events, Glass said.

“We are looking at successful communities who have them and communities that this did not work well in,” Muldrew said.

Georgia Southern University students have agreed that making this move would bring more business to the area.

“My PR research class did research for a client in downtown, and the whole class basically agreed that people would go down there more often if it was like River Street in downtown Savannah,” Glass said.