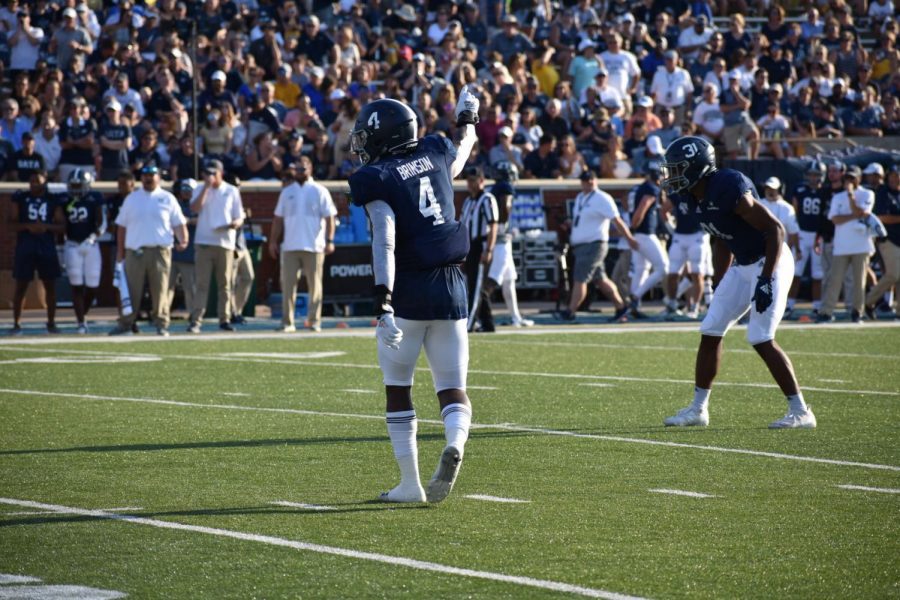 STATESBORO — After the LSU shellacking the Georgia Southern defense went through last week, Monquavion Brinson and the other leaders called a meeting. Brinson took it upon himself to help the defense rise to the standard that led the Sun Belt in 2018.

“I had to get the defense better than it was last week,” he said. “After last week’s loss, our defense made a vow that we’re not letting anything like that happen again. We kind of preached it all week and that’s the mindset we went through all week.”

Brinson held his end of the bargain, leading the Eagles with seven tackles, six of which were solo, two pass breakups and multiple finger waves in GS’ 26-18 victory against Maine.

He sure had the opportunity to make the plays, with Maine’s Chris Ferguson targeting Brinson’s side of the field all night. It didn’t come at first, with the Black Bears shredding through the GS defense on the first drive.

Maine looked like they were going to do what Joe Burrow and the Tigers did last week, but then the defense flipped a switch.

After each tackle, Brinson jumped up and wagged his finger and then celebrated with his teams before refocusing and lining up.

It was more than just self-pride that motivated Brinson Saturday.

“Early this week, some of the young guys told me and Kindle, after the game we had last week, that we had to earn our names this week,” he said. “As of right now, me and Kindle have no names. We’re just trying to slowly get our name back.”

Brinson wasn’t the only one who regained some confidence for a GS defense that allowed 472 yards a week before.

Transfer inside linebacker Reynard Ellis backed up his eight tackle performance with a seven tackle night and safety Kenderick Duncan Jr had an interception and five tackles.

“I’m very happy with what the defense did,” Lunsford said. “They were embarrassed last week.”

The embarrassment of giving up 55 points took its toll on the defense who picked up two turnovers in the win against Maine.

Brinson did more than just have an impact on the defense, as he returned two kickoffs for 44 yards. On the first one, he took a huge hit and stumbled a bit before he got back up.

The second return, Brinson went 31 yards to set the Eagles up on the 35.

“It was a good feeling, but the first one didn’t go too well,” he said. “We had a game plan that we know we can return it and I know what I can do with the ball in his hand.”

Now, the Eagles will have another Power 5 test against Minnesota next week before a bye week. Not only is Brinson and the defense ready for another opportunity to compete and improve, the senior corner wants something else.

He wants a turnover of his own.