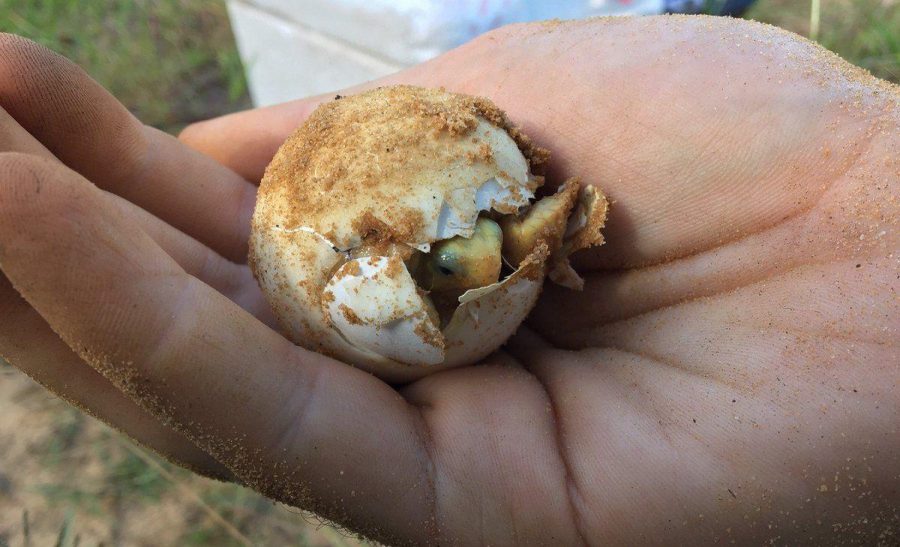 DeSha’s research involves observing the effects of climate change on the tortoises and their eggs.

STATESBORO —Grad Student Nicole DeSha came across a rare sight, a gopher tortoise hatchling in the process of emerging from its egg, while conducting her research.

DeSha’s research involves observing the effects of climate change on the tortoises and their eggs; an increase in temperature could reduce the viability of eggs, preventing some from hatching.

This shift could also skew the population’s sex ratios; gopher tortoises are affected by temperature dependent sex determination, meaning that their gender before hatching is determined by the average temperature they experience. Warmer temperatures produce more female hatchlings, resulting in an imbalanced population.

To witness these effects firsthand, DeSha, alongside several others in Biology Professor Elizabeth Hunter’s lab, took to the field, searching southern Georgia for gopher tortoise nests. Done during this summer, the time frame during which the tortoises were expected to hatch, the researchers dug for nests, hoping to find signs of them before any hatchlings emerged.

Once a nest was found, it was stored in an incubator to allow the hatchlings to hatch in a safe and controlled environment, allowing the researchers to observe them as they hatched and see if any failed to. In addition, a blood sample was taken from each hatchling to determine their gender–and if climate change was truly having an effect.

After a few days, most of the hatchlings will be released, but some are kept until they are old enough to develop defining sex organs to ensure the blood samples collected are accurate.

“We have partners who are also doing this work with desert tortoises out west,” Professor Hunter said, “so we are investigating the same questions at the same time so we can see if there are any patterns, correlations between the two groups.”