Around the Sun Belt: Week four 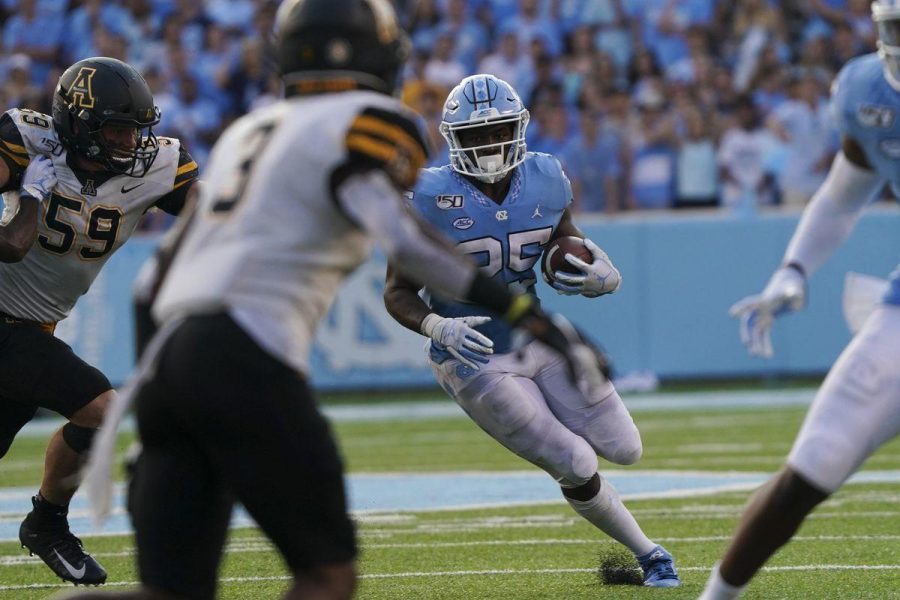 Even though the Georgia Southern football team had a bye week, most other teams in the Sun Belt competed during week four. Some opened up conference play, while others took on some action against Power 5 teams.

Here’s how they did:

App State had a huge 34-31 win over ACC in-state foe North Carolina after coming off a bye week, extending their winning streak to three. As a team, the offense rushed for 161 yards and put up 224 passing yards on UNC. Junior quarterback Zac Thomasthrew for all 224 yards for the mountaineers, but also threw one interception and fell to two sacks. Junior running back Darrynton Evansled App State with 78 rushing yards. He also scored all three rushing touchdowns. On the defensive end, junior defensive lineman Demetrius Taylorhad an impressive game with four tackles, two forced fumbles, a fumble recovery returned for 20 yards, one interception returned for 19 yards and one pass breakup.

The Mountaineers are now still undefeated as they will open conference play against Coastal Carolina at home on Saturday.

The Red Wolves found redemption from their previous 55-0 shutout to Georgia, and claimed their second win of the season over Southern Illinois, 41-28. As a team, ASU had 117 rushing yards and 357 passing yards. Redshirt-junior quarterback Logan Bonnerthrew for 320 yards and four touchdowns on the night, matching his career best. Defensively, redshirt-junior linebacker Tajhea Chamberssaw a good game, notching 11 tackles as well as returning an interception for 16 yards.

The Red Wolves are now even on the season being 2-2 and will be opening conference play against Troy at Troy on Saturday.

CCU celebrated their third win in a row after sealing a big 62-28 win over UMass.The Chanticleers rushed for 334 yards and passed for just over 302 yards against UMass. Junior running back CJ Marable was a leader for the team, rushing for 100 yards and two touchdowns. Sophomore quarterback Fred Paytonsaw success with his passing game, completing 16 of 18 passes and throwing for 203 yards and a touchdown. Redshirt-freshman linebacker Jamar Darboe lead the defense with six total tackles on the night, while redshirt-freshman linebacker Cincer Evans also had an impressive game for the defense with three tackles and an interception.

The Chanticleers are looking to carry their momentum from their three-game win streak to Boone, North Carolina as they prepare to open up conference play against Appalachian State on Saturday.

The Eagles will open conference play Saturday after having a full two weeks to prepare for the Louisiana Ragin’ Cajuns.

The Panthers recorded their second loss of the season and their first conference loss at Texas State, falling 37-34 in triple overtime. GSU only saw one rushing touchdown after rushing for 204 total yards, but had an impressive passing game with 2019 yards and three passing touchdowns. Senior quarterback Dan Ellington completed 24-of-29 pass attempts and threw for all 219 yards with a long of 28 yards. Ellington also threw an interception and fell to two sacks. Junior linebacker Trajan Stephens-McQueen lead GSU defense for the second week in a row with 15 tackles.

The Panthers have a bye week and will continue conference play on Saturday, Oct. 5.

LA collected their third win of the season with a 45-25 victory over Ohio, extending their winning streak to three. The team rushed for 285 yards and passed for 204 yards over the Bobcats. Leading the Ragin’ Cajuns offense was junior quarterback Levi Lewis,who threw for 188 yards and two touchdowns. Junior running back Elijah Mitchell led the offense with an impressive game, rushing for 143 yards and three touchdowns as well.

The Ragin’ Cajuns are traveling to open up conference play in Statesboro, as they look to extend their winning streak taking on Georgia Southern.

USA recorded their third loss of the season to UAB 35-3, falling to a 1-3 overall record and a two-game losing streak. The jaguars were unable to find the endzone, as the only points put up against UAB came from a single 27-yard field goal kicked by sophomore kickerFrankie Onate. As a team the Jaguars rushed for just over 100 yards and passed for 83 yards. Junior quarterback Tylan Morton had a tough game, being sacked four times and only completing 5-for-10 pass attempts. On the defensive side of the ball, sophomore linebacker Nick Mobly logged ten tackles.

The Jaguars are looking to break their losing streak as they travel to play ULM Saturday, opening up conference play.

The Bobcats snapped their three-game losing streak and claimed their first win of the season over Georgia State, beating them 37-24 in triple overtime. The team rushed for 221 yards, and passed for 129 yards. Junior quarterback Gresch Jensen led TXST with all 129 passing yards, but was sacked one time. Jenson also rushed for 30 yards and collected a rushing touchdown. On the defensive side of the ball, senior linebacker Bryan London ll logged 22 tackles on the night, including a tackle for loss and a sack.

The Bobcats are hoping to continue their newfound success as they host Nicholls State on Saturday.

After falling to Southern Miss, Troy bounced back with a 35-7 win over Akron. The Trojans rushed for 270 yards, and threw for just over 200 yards. Senior quarterback Kaleb Barker threw for 214 yards on the night, as well as throwing for three touchdowns, but did end up throwing an interception. Sophomore running back DK Billingsley led Troy in rushing with 100 yards as well as rushing for a touchdown. Defensively, junior linebacker Justin Whisenhunt had an impressive game with four tackles, including a tackle for loss and a forced fumble.

The Trojans will be opening up conference play as they host Arkansas State on Saturday.

Despite the bye week the Warhawks had to recover from their close loss to Florida State, ULM collected their second loss of the season to Iowa State, falling 72-20. ULM rushed for 228 yards and threw for 197 yards, while having three total touchdowns. Senior quarterback Caleb Evans threw for 176 yards and two touchdowns, but threw an interception. Evans also led the Warhawks by rushing for 93 yards with a long of 40 yards on 17 attempts. Defensively, fifth year linebacker Corey Straughter had an impressive game where logged four solo tackles against ISU as well as an interception he returned for 14 yards.

The Warhawks open up conference play on Saturday as they will be hosting South Alabama.