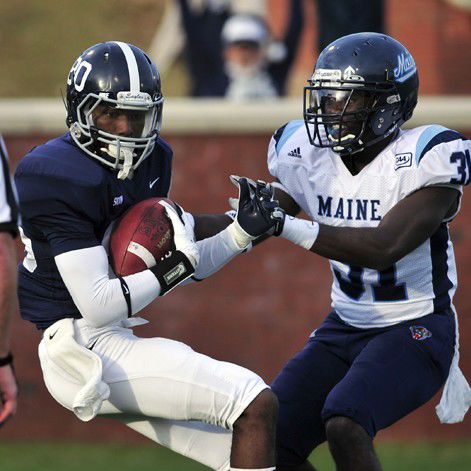 Georgia Southern ended UMaine's season in 2011, beating them in the NCAA football quarterfinals.

The Georgia Southern football team is set to take on their second opponent of the 2019 season Saturday, but this is not the first time the two teams have met on the gridiron.

The last time the Black Bears and the Eagles matched up was in 2011, where the Eagles won 35-23 in the NCAA FCS Championship playoffs to advance to the semifinals.

The defense played a key role in the Eagle win over the black Bears back in 2011, making three interceptions with Jerick McKinnon hauling in two of them.

“Our defense made some big plays,” former Head Coach Jeff Monken said after the game. “They took a lot of criticism this past week, including some from me, but they gave up only 23 points, seven of those on a kickoff return, against a really good offensive team.”

The two teams faced off two times prior to that, both wins taken by the Eagles. A 31-7 win in 2002 and a 31-28 win in 1987 gives GS a three-game win streak against the University of Maine. The Eagles ended all UMaine’s seasons with all three wins as they were all playoff games.

The Eagles will host Maine Saturday at Paulson Stadium with kickoff set for 6 p.m.