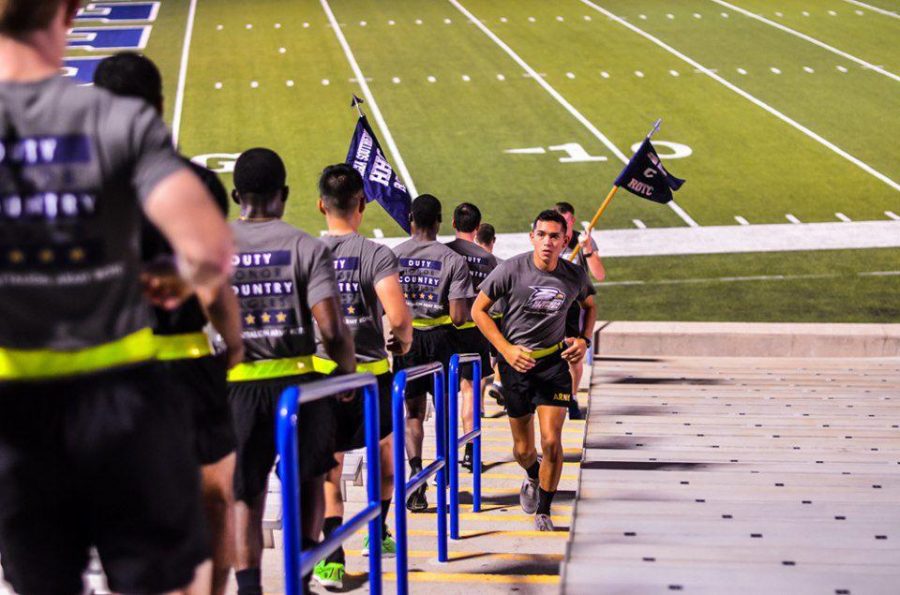 The number 1,980 was chosen specifically to honor the stairs climbed by first responders in the two World Trade Center.

STATESBORO — The Georgia Southern ROTC program ran 1,980 stairs in Paulson Stadium Wednesday morning in memory of those who lost their lives on Sept. 11.

The number 1,980 was chosen specifically to honor the numbers stairs climbed by first responders in the two World Trade Centers.

Battalion Commander Mattie Cantrall, senior logistics and intermodal transportation major, said that this act was bigger than herself.

“The 9/11 Stair Climb meant being apart of something bigger than myself and the Battalion,” Cantrall said. “It meant trying to honor the lives of those that paid the ultimate sacrifice by climbing 110 flights of stairs with every other person in the nation.”

Perla Gomez, sophomore pre-pharmacy major, said that she thought the tribute was very creative and that an event like this is why she enlisted.

“I love the creativity that our battalion commander, Mattie Cantrall, had behind this,” Gomez said. “This plan came directly from the heart. You always remember how people make you feel and events like this remind me of why I decided to enlist.”

Olivia Woodworth, freshman exercise science major, said that the tribute was not enough to show her gratitude.

“Even the 110 flights of stairs aren’t enough to show my gratitude.” Woodworth said. “This special day is not only a reminder to me, but to all to strive to be someone else’s hero in your everyday life.”

Cadet Joseph Napolillo, sophomore writing major, said that the event made him proud of his peers in ROTC.

“The fact that we had cadets come forward with the idea of running the stadium stairs says a lot about the young men and women we have in our program,” Napolillo said. “It makes me extremely proud to work alongside all of them everyday.”