Two defensive touchdowns not enough for an upset, Eagles lose 35-32 in Minnesota 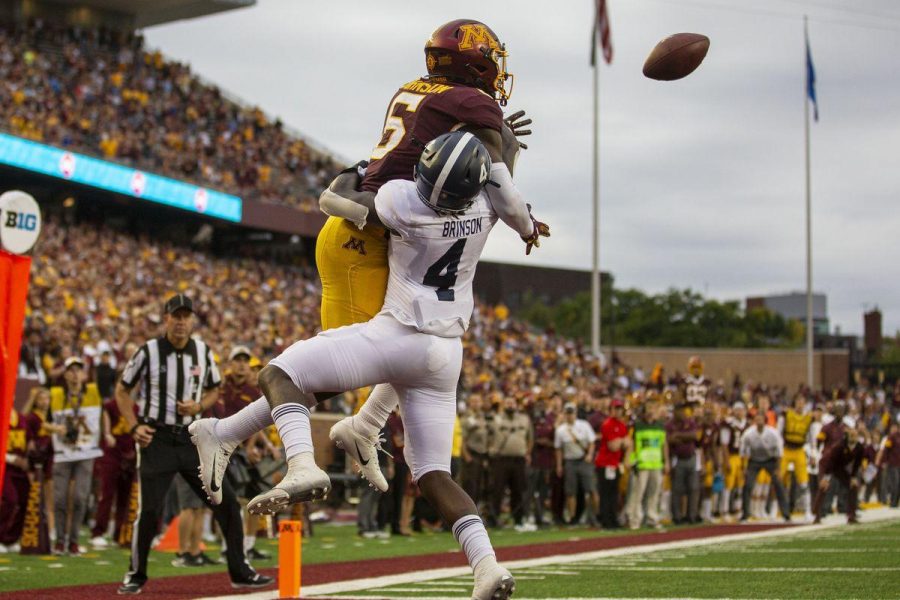 Both coaches had signs of glee after linebacker Rashad Byrd had just returned a Golden Gopher fumble 44 yards to give the Eagles a 32-28 lead.

Twitter was buzzing at the thought of another Big Ten school falling, GS faithful in TCF Bank Stadium were jumping with pride and it looked like the Eagles were going to pick up just their second Power 5 victory in program history.

But the celebration was premature.

Tanner Morgan orchestrated a 13 play, 75 yard scoring drive that took off 3:34 to leave GS just 13 seconds to play with before the upset bid became a thought of the past.

“There’s a lot of things to point fingers at,” Lunsford said. “We have to do a better job of ball security. We have to control the clock in the second half. We have to get our defense off the field.”

Ball security wasn’t a problem in the first quarter for the Eagles. It was the Golden Gophers who had trouble on offense.

On just the second play of the game, Morgan threw the ball and safety Kenderick Duncan Jr. came down with his second interception of the season. The redshirt-sophomore returned the interception down to the Minnesota 21 yardline.

The next play, Logan Wright ran behind a stout interior offensive line to find the endzone, putting GS up 7-0.

After finding nothing on the ground, the Minnesota offense resorted back to their passing game. Morgan hit Tyler Johnson on a slant and Johnson took it 73 yards to tie the game.

The Golden Gophers then used an 11 play drive to drain down the GS defense. Another connection from Morgan to Johnson gave Minnesota the lead again.

Justin Tomlin, who started over injured Shai Werts, couldn’t get anything moving on offense and Anthony Beck had to punt the ball back to the home team.

Both teams exchanged drives of stagnant offenses before GS put the ball on the ground for the first time.

Tomlin hit tight end Cam Brown on the right side who cut the ball up field. Once he got past the line of scrimmage, Brown was stripped by Antoine Winfield Jr.

Minnesota found the endzone to make it a 21-10 game.

The Golden Gophers rushed for nine yards before failing to convert a 4th and 1 to give GS the ball on the Minnesota 34.

Just before halftime, Tomlin took the ball to the right and dove for the pylon to score.

A quick, scoreless third quarter set the game up for a 20-21 Minnesota lead to start the fourth quarter.

“I’m proud of our guys for their effort,” Lunsford said. “They fight, they’re resilient, I love them. They’re my type of dudes, but we have to find a way to finish and unfortunately that’s not what we’re doing right now.”

But the finishing was vacant. The fourth quarter final drive was plagued with missed defensive assignments, including a 3rd and 29 play that Morgan scrambled 21 yards on. The Golden Gophers converted the 4th and 8.

“We played our butts off til the end and that’s all we can ask for one another and my teammates,” Byrd said. “Effort is good. Attitude is good. We just have to fix the little mistakes then we’ll be something good.”

The Eagles now head into a bye week before beginning Sun Belt play. They have a lot to look at with injuries and suspensions still in play.

And there’s three very different performances from the GS offense while the defense has been fairly consistent.

Bob DeBesse’s offense had just 198 yards of total offense and Tomlin accounted for 132 of those. He rushed for 57 yards, a touchdown and a fumble on 14 attempts, while going 5-for-9 through the air to pick up 75 yards.

“I’m disappointed in myself in the fumble I had,” Tomlin said. “As a team we played tough.”

Now, Lunsford and his team stare at a 1-2 record and face a 2-1 Louisiana team in Paulson Stadium in two weeks.

“We’ll find out a lot about our team right now,” Lunsford said. “These next two weeks will be tough. There’s a dejected group in there, but like always you can’t let a loss define you. You have to go on and play better the next time.”