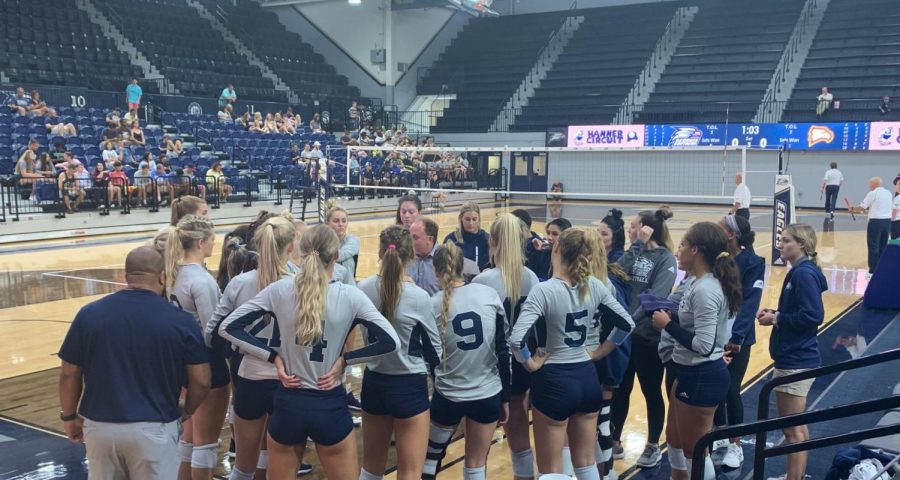 The team has improved to 4-3 overall.

“Overall, I think we’re in a really good spot right now,” Head Coach Chad Willis said. “Hanner was electric this weekend, we couldn’t have asked for a better showing. Eagle Nation did its job. They were here, they were loud and we felt that energy.”

In the first game against UNC Asheville on Friday morning, GS was led by sophomore outside hitter Maddie Bryant who tallied 17 kills and 18 digs, a career-high.

The team fell in the first set but found an offensive rhythm to take the match 3-1.

On Friday night, GS swept Southern Miss with a strong defensive front, 3-0. The Eagles held the lead for the majority of the game and hit a season-high .309. Sophomore setter Madison Brown notched 41 assists, while junior libero Landon Jones added 19 digs.

The game brought in a crowd of 520 people, which nearly matches the attendance for last year’s rivalry game against Georgia State where GS won 3-1.

On Saturday, GS struggled behind a game full of inconsistency. After falling behind by two sets in the match, GS made an effort to take over the game in the third period but came up short.

Winthrop set a high pace of play from the very beginning and GS struggled to keep up the momentum. The comeback effort was almost successful, as GS narrowed the score down to 24-23 in the final moments but a quick point by Winthrop forced the game closed.

“I thought they controlled first contact…a lot better than we did,” Willis said. “We knew that going in that we were going to have to be the more aggressive team…Unfortunately, we couldn’t do that today, whether that was us or whether that was just them stepping up.”

The team was led by Bryant, Brown and freshman right side hitter Mya Wilson. She added 11 kills and two block assists. She has seen action in all seven games and added 78.5 points so far this season.

“I think we fought really hard this weekend,” Bryant said. “And I think those two wins, we earned those.”

Bryant, Brown and Wilson made the All-Tournament team for their efforts over the three game span. With this tournament in the books, GS will be back in action on Tuesday at North Florida.