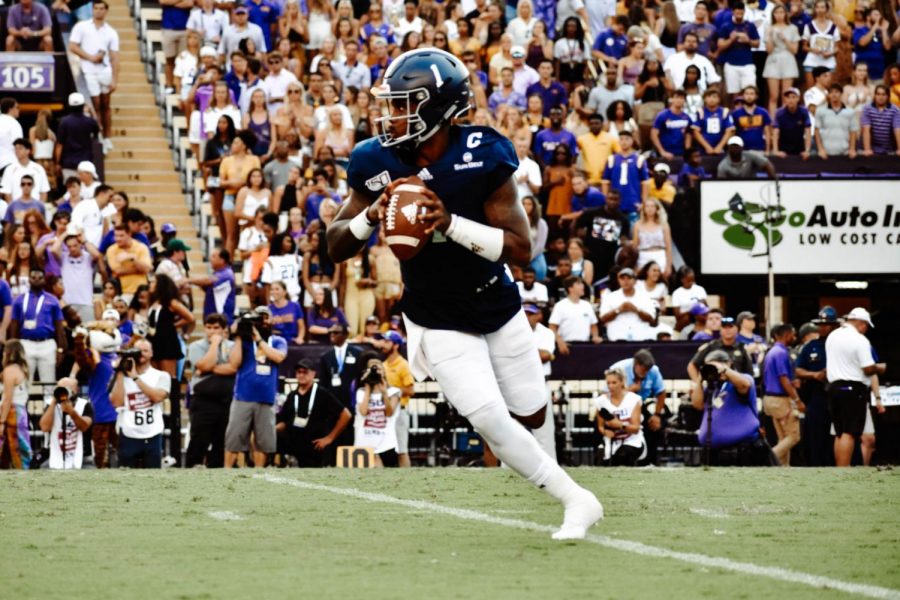 Although seen in a sling at LSU, redshirt-junior quarterback Shai Werts has been ruled day-to-day and should be back on the field for UMaine.

STATESBORO — Coming off an ugly loss to No. 6 LSU, the Georgia Southern football team will be looking to redeem themselves in their home opener against Maine Saturday.

The Eagles season opener against LSU was not pretty as they lost 55-3, and they also lost redshirt-sophomore defensive end Justin Ellis for the season. The Syracuse transfer suffered a knee injury during the game, putting him out for the season. Redshirt-junior quarterback Shai Werts was also injured in the LSU game, but he’s been ruled as day-to-day and should be good to play Saturday.

The Eagles showed there’s a lot to be worked on, but Lunsford remains confident in the team.

“I don’t worry about our guys in the environment,” Lunsford said after the LSU game. “They’re trained to control what they can control. They do a good job of getting their minds right…I think we played a really good football team and we’re going to have to go learn from this. I don’t think the moment was too big for them at all.”

The Eagles will be missing key players Wesley Kennedy III and Magill Bauerle, as both are on suspension due to academics, but Lunsford is confident in the abilities of the rest of the Eagle roster to step up.

It can be expected for Oklahoma State transfer J.D. King to deliver in the run game. King was recently granted eligibility to play for the Eagles this season and played at LSU where he rushed for 23 yards.

Redshirt-freshman Anthony Beck II saw a lot of time in at punter during the LSU game, and performed well. The Guyton, Georgia native had one of the positive plays in the game with his 74-yard punt against the Tigers.

On the defensive end, the Eagles have a solid line in returners such as redshirt-sophomore safety Kenderick Duncan Jr and redshirt-junior linebacker Rashad Bryd.

Maine shouldn’t be as stiff of competition as LSU, but the Eagles aren’t taking them lightly.

Maine is proving they’re a force to be reckoned with as their season opener against Sacred Heart resulted in a 42-14 win.

The Black Bears passed for 431 total yards and rushed for 152 yards, as well as scoring three rushing touchdowns and three passing touchdowns. Maine’s offense showed for 35:04 minutes of possession against Sacred Heart and the defense only allowed for 103 rushing yards and 104 passing yards.

Junior quarterback Chris Ferguson is returning to the field to lead the Bears after his impressive season in 2018 where he played in and started in 12 games. He ranked sixth in the CAA in total offense per game last season as well as being second for passing touchdowns with 22.

Maine’s success with their passing game could pose a problem for the Eagle defense as they struggled with that against LSU, allowing the Tigers to throw for five touchdowns and 350 total yards.

The Black Bears are also coming off an impressive previous season, as they were semi-finalists in the FCS playoffs and logged a 10-4 overall record.

“The Maine Black Bears, man they’re a good football team,” Lunsford said. “Obviously a really good season last year being a semifinalist in the FCS playoffs. Just watching them on their film from last week, obviously a lot or returning starters on both sides of the ball. Definitely have our work cut out for us and we’ve got to be on point.”

Another returner to the field for the Black Bears to look out for is redshirt-senior running back Joe Fitzpatrick who appeared in 13 games last season where he rushed 102 times for 533 yards. Fitzpatrick also rushed for four touchdowns last season and has already logged one for this season against Sacred Heart.

With All-American linebacker Deshawn Stevens out for the year with an injury, the Black Bears’ defense will be led by junior linebacker Jaron Grayer who played in 13 games last season where he made 42 tackles and four sacks as well as notching a forced fumble and two interceptions.

The No. 6 ranked FCS team is looking to snap the Eagles’ three-game win streak over Maine. GS’ recent history with FCS teams has slightly been unpredictable, as they blew out South Carolina State last season 37-6, but were upset by New Hampshire in the 2017 season, losing 22-12.

The Eagles and the Black Bears will face for the first time since 2011 on Saturday at Paulson Stadium. Kickoff is set for 6 p.m.