PREVIEW: Georgia Southern travels north for a bout with Power-5 foe Minnesota with both squads looking for an offensive boost 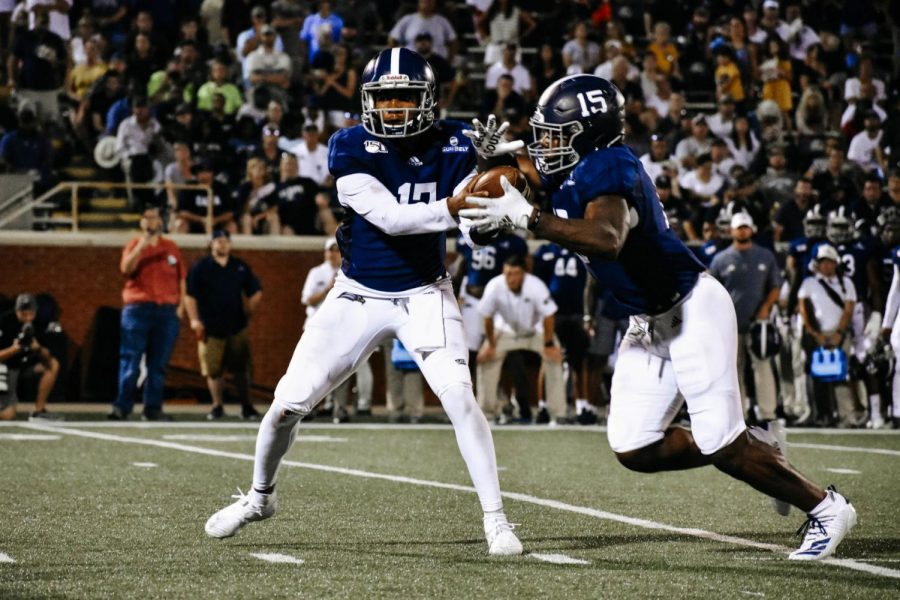 Tomlin (17) and King (15) work well together, as King rushed for 41 total yards against Maine.

The Eagles will be heading to Minnesota Saturday to take on another Power 5 school, and both teams seem to need a boost on the offense.

The biggest and most important question for the GS offense is the status of redshirt-junior QB Shai Werts, whose status for Saturday’s game remain up in the air.

Redshirt-freshman Justin Tomlin got his first start against the Black Bears where he rushed for 136 yards and a touchdown while just going four-of-nine through the air for 63 yards. If Werts is unable to go, then Tomlin will be playing against a second power-5 team in just the first three weeks of the season.

If the Eagles want to shock the Golden Gophers, they will lean heavily on a duo of redshirt-sophomore running backs in Matt LaRoche and Logan Wright.

LaRoche and Wright joined Tomlin in the 100+ rushing yard game with 132 yards and 114 yards, respectively. The redshirt-sophomore LaRoche also found the endzone for the first time of his career. With Wes Kennedy still under suspension for a few more games, LaRoche and Wright figure to play a bigger role alongside J.D. King in the immediate future.

While the passing game has been virtually nonexistent for the first two games, GS is still very talented at the receiver position, highlighted by redshirt-senior Colby Ransom and redshirt-junior Darion Anderson. Ransom has yet to catch a ball yet this season, but Anderson holds the team-long 45-yard reception against Maine.

The Golden Gophers come into the game at 2-0 after two very narrow wins and unimpressive offensive performances.

Minnesota has averaged 33 points per game, against South Dakota State and Fresno State, and scored a total of eight touchdowns.

Carrying the rock for the Golden Gophers is the bell cow senior running back Rodney Smith. Through the first two games, the Jonesboro, Georgia native carried the rock 43 times for 153 yards with a touchdown and could be a problem for the Eagles come game time.

As a team that airs the ball out quite a few more times than GS, Minnesota brings two wide receivers who have had really good starts to their season in sophomore Rashod Bateman and senior Tyler Johnson.

Bateman, out of Tift County High School in Tifton, Georgia, leads the Golden Gophers in essentially every receiving category, including 237 passing yards, which is just slightly less than half of the team’s 410 total passing yards.

The senior, Johnson will likely eclipse the 100-yard receiving mark against the Eagles, coming in with 99 yards off of seven receptions and no yards.

GS and Minnesota square off for the first time in program history, with kick off set for 3:30 Eastern.