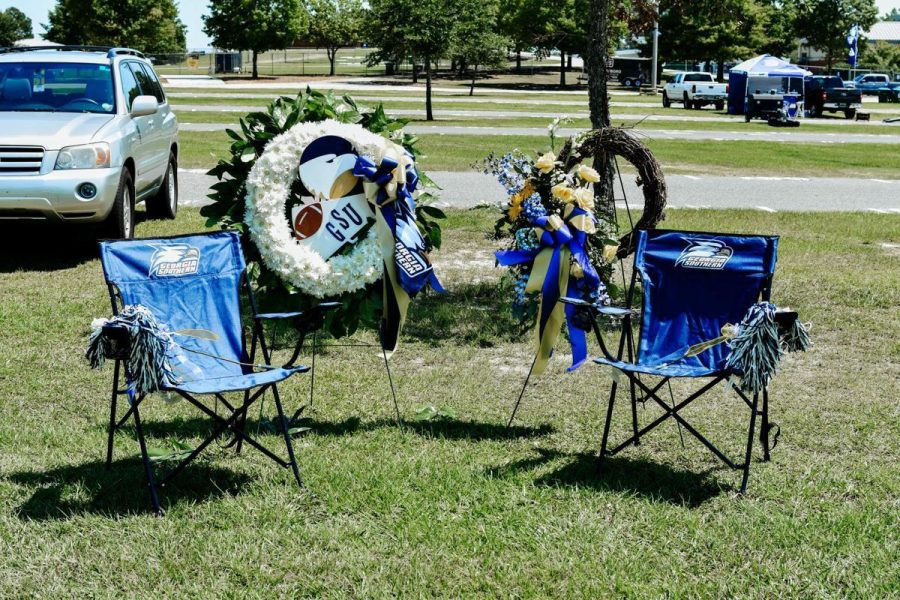 The Hagan’s tailgate spot was decorated in honor of Danny and Julie at the home opener against Maine on Sept. 7.

STATESBORO — Following the death of two Georgia Southern fans and alums, popular Statesboro restaurants, Gnats Landing and Del Sur, have continued to raise money for and support the family through percentage nights this week.

Danny and Julie Hagan were driving home from Baton Rouge after the GS versus LSU game on I-16 on the evening of Sept. 1 when their car hydroplaned and struck a tree, killing the couple.

“They were very personable with everybody,” Bradley Taylor, the general manager of Del Sur Taqueria and Cantina, said. “They were just great people to have around.”

Gnats Landing, Del Sur and other members of the community are making it their mission to support the children and family members of Danny and Julie.

For over a year now, the Hagan children have been employed by Gnats and Del Sur.

Not only did Taylor spend time with the Hagan children, but he also was very good friends with their parents.

“They were some of the best people you could meet,” Taylor said. “They were always up here supporting us, hanging out and having a good time. Because of the support and love that we’ve been given by that family, we owe it to them.”

The percentage night at Gnats was very successful and the business has decided not to disclose the amount of money raised, according to Taylor.

A GoFundMe was started by Colin O’Connor on Sept. 3. The initial goal for the fundraiser was $10,000 dollars and then $25,000 dollars. By Sept. 4, O’Connor had posted to the GoFundMe page that they have exceeded their initial goal and were moving it up to $35,000.

“We are so thankful for the kindness of each and every one of you. The generosity & selflessness of those affected by the Hagan family’s loss is abundant & heartwarming,” O’Connor wrote. “Please continue to share and support the Hagan family as we strive to provide peace of mind during these tragic & trying times.”

The current amount of money raised through this GoFundMe is $33,977 dollars.

“This fund is to provide peace of mind, support, and love to the Hagan family. No donation is too small and all amounts are welcomed,” O’Connor wrote on the GoFundMe page.

The link to the GoFundMe can be found here.

LSU is also showing their support for the family through a GoFundMe with $43,121 dollars raised with a goal of $45,000 dollars, accessible here.

In addition to the GoFundMe pages, a Meal Train created to deliver food to the Hagans. For more on the Meal Train, click here.