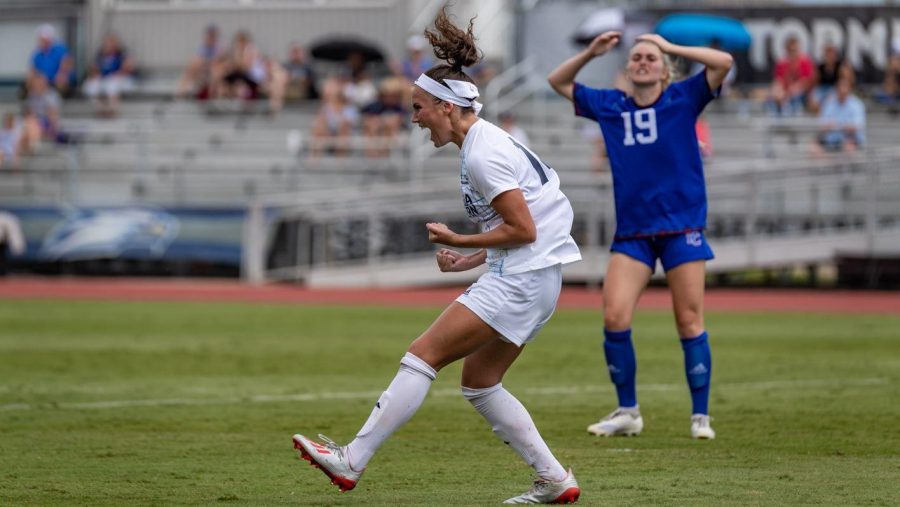 The team boasts a strong 3-1 record compared to their 1-3 start last season.

The Georgia Southern women’s soccer team completed a weekend sweep to raise its record to 3-1 on the season with victories over Gardner-Webb and Presbyterian College.

GS went down 1-0 after Gardner Webb’s Stina Kleppe scored 25 minutes in, but quickly bounced back when redshirt-junior midfielder Marcella Montoya scored her first of two goals eight minutes later off a cross from Frida Brattum.

Gardner Webb would go on to score in the waning seconds of the first half to go ahead 2-1 entering the break.

Montoya scored again to tie the game, and a goal from senior forward Frita Battum would match a Bulldog penalty kick to set up overtime.

Brattum would score and seal the game off an assist from freshman midfielder Karin Winka during the extra time..

The team played again on Saturday, defeating Presbyterian College, 2-1. After a quiet first half, GS gained the competitor’s edge after a cross from freshman forward Dani Coumbs was own-goaled at minute 55.

Coumbs stepped up again ten minutes later by setting up Battum for a third goal and extend the lead to two. Presbyterian managed to squeak in one goal far too late to allow the Eagles to improve to a 3-1 record on the young season.

Coumbs, a freshman from Warner Robins, spoke to the team’s locker room strength and resilience following the game.

“It takes motivation and we were tired from having a game Friday,” she said. “We finally got our motivation up. It just takes the support of the team…This win shows how connected we are and even from the sideline they encourage us and it’s just a good community.”

GS hopes to continue its winning ways with a game at Stetson on Thursday night at 7 p.m.