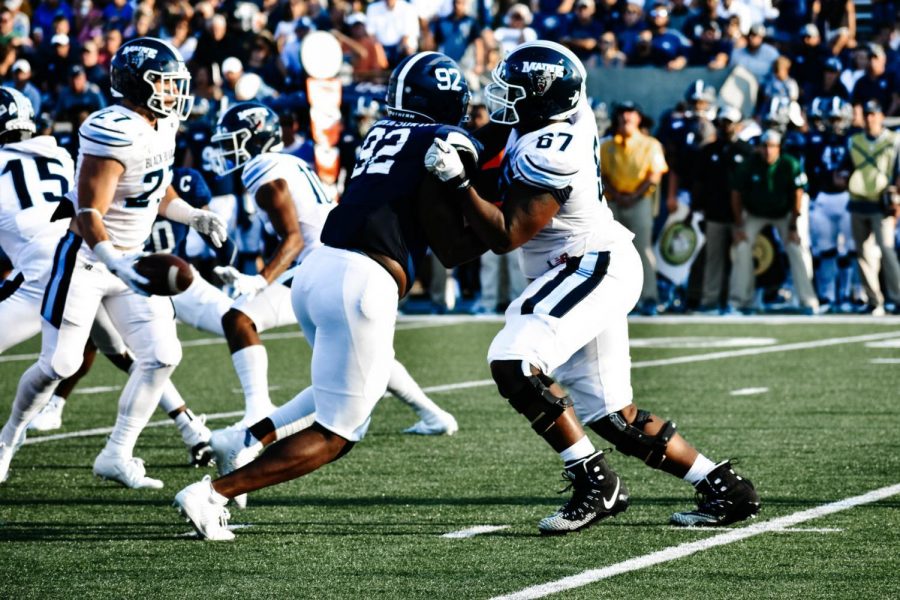 The defense shone against Minnesota, collecting two touchdowns from fumble recoveries in the fourth quarter alone.

MINNEAPOLIS, MN — In the third game of the season, the Georgia Southern football team fell to the Minnesota Golden Gophers 35-32, in a nail biter of a game.

The Eagles fought hard until the end, almost pulling off an upset after the defense showed some amazing plays, but it wasn’t enough as GS falls to a 1-2 record.

Here’s a quick look at the loss:

Senior cornerback Monquavion Brinson ignited the fire in the defense when he returned a blocked field goal with just over six minutes left in the fourth quarter, to put the Eagles only two points under Minnesota’s lead.

The field goal was blocked by redshirt-sophomore lineman Reynard Ellis, and was the  first blocked field goal returned for a touchdown by GS since Chad Nighbert in 1995 at Marshall.

Redshirt-freshman quarterback Justin Tomlin made his second start of the season where he rushed for a touchdown and an overall of 57 yards. Tomlin also put up 64 passing yards on the Power 5 defense.

Wide receiver Tyler Johnson had a successful day for the Golden Gophers, catching three touchdowns. The senior had a total of 140 receiving yards on the night.

The GS offense out-rushed the Golden Gopher offense as they rushed for 123 yards and Minnesota only rushed for 93.

Rashad Byrd returned a 44-yard fumble for a touchdown late in the fourth quarter, giving GS their first lead over Minnesota. This is Byrd’s first career touchdown.

Redshirt-junior quarterback Shai Werts still hasn’t played since LSU, but Tomlin seems to be holding his own and controlling the offense with ease.

Redshirt-sophomore running back Logan Wright rushed for his first touchdown on the season. Wright ran for 21 yards to put up the first points for the Eagles against Minnesota.

Redshirt-senior kicker Tyler Bass remained solid as ever as he was 2-2 on field goals with a long of 45 yards as well as going 2-for-2 on PATS.