Around the Sun Belt: Week three 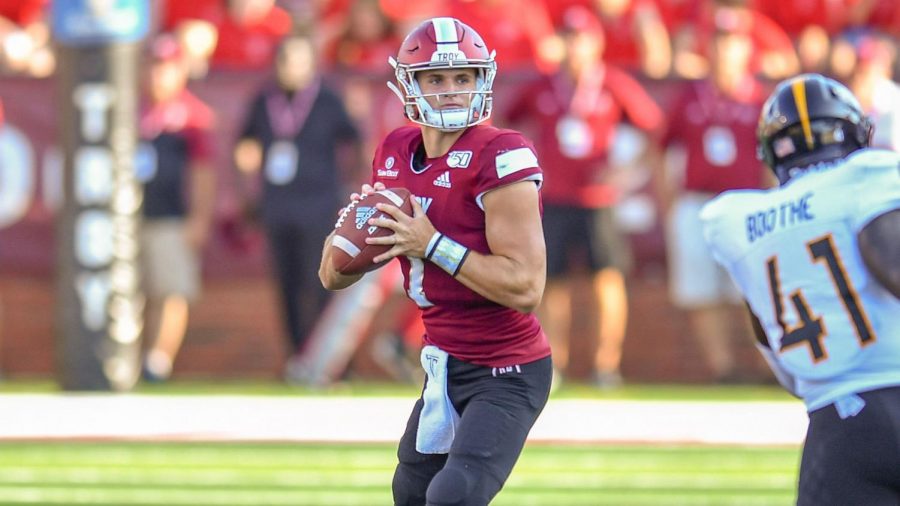 All Sun Belt teams have yet to begin conference play, but most saw the gridiron during week three of college football.

Here’s how they did:

App State hasn’t hit the field since their 56-41 win over Charlotte, September 7. As a team, the Mountaineers rushed for 276 yards against Charlotte, with junior running back Darrynton Evans leading App State with an impressive 234 yards. Junior quarterback Zac Thomas is proving he’s ready for another successful season after throwing for 182 yards against Charlotte as well as throwing for three touchdowns.

The Mountaineers are now on a two-game win streak as they prepare to take on North Carolina on Saturday.

ASU faced against now No. 3 Georgia, and fell 55-0 to the Dawgs. Despite the inability to score, the Red Wolves completed for 177 passing yards and 43 rushing yards against UGA. Redshirt-junior quarterback Logan Bonnerthrew for 124 yards, but saw three sacks on the field. On the defensive side of the ball, Redshirt-junior linebacker Tajhea Chambershad a career-high of 10 tackles on the night, and junior cornerback Jerry Jacobsalso logged two pass breakups over UGA.

The Red Wolves are preparing to host Southern Illinois this Saturday.

CCU celebrated their second win in a row after claiming a 46-7 victory over Norfolk State.The Chanticleers rushed for over 400 yards and passed for 120 yards against NSU. Junior running back CJ Marable lead the team, rushing for 101 yards and a touchdown. Redshirt-senior nose tackle Sterling Johnsonhad an impressive game on the defensive side of the ball, having a sack for loss of six yards and having 3.5 total tackles for a loss of 16 yards.

The Chanticleers are looking to carry their momentum of a two-game win streak to Massachusetts as they prepare to take on UMass Saturday.

Falling in a disappointing way to Minnesota, the Eagles have a while to work and rebound as they’re now facing a bye week. The almost-upset over Minnesota included an immensely impressive performance from the Eagle defense. Junior linebacker Rashad Byrd logged a total of 11 tackles as well as a forced fumble and a fumble recovery which he rushed 44 yards for a touchdown. Senior cornerback Monquavion Brinson also found the endzone for the first time in his collegiate career after recovering a fumble from a blocked field goal and returning it for 77 yards. Redshirt-freshman quarterback Justin Tomlin started again in the absence of Shai Werts, and threw for 75 yards against the Golden Gophers as well as rushing for 57 yards and a touchdown.

With a bye week ahead, the Eagles have a full two weeks to prepare for their first conference game against the Louisiana Ragin’ Cajuns September 28.

The Panthers saw their first loss of the season at Western Michigan, falling 57-10. GSU only found the endzone in the first quarter, but WMU was able to hold them scoreless for the rest of the game. The Panthers put up 210 rushing yards and 126 passing yards over the Broncos. Senior quarterback Dan Ellington linked a 20-yard pass with redshirt-junior tight end Aubry Payne for the Panther’s lone touchdown against WMU.Junior linebacker Trajan Stephens-McQueenlead GSU defense with 10 tackles and logging one tackle for loss.

The Panthers open up conference play traveling to Texas on Saturday to take on Texas State.

LA collected their second win of the season with a huge 77-6 victory over Texas Southern. The team rushed for 440 yards and passed for 308 yards over the Tigers.Leading the Ragin’ Cajuns was junior quarterback Levi Lewis,who threw for 181 yards and two touchdowns. Junior running back Elijah Mitchell also had an impressive game on the offensive side of the ball, rushing for 73 yards and two touchdowns as well.

The Ragin’ Cajuns are looking to extend their two-game win streak as they take on Ohio, at Ohio on Saturday.

USA recorded their second loss of the season to Memphis 42-6, falling to a 1-2 overall record. As a team the Jaguars rushed for just over 100 yards and passed for 147 yards. Junior quarterback Tylan Morton connected a 74-yard pass with junior wide receiver Kawaan Baker early in the fourth quarter for USA’s only touchdown over the Tigers. On the defensive side of the ball, sophomore linebacker A.J. DeShazor logged six tackles and returned a fumble recovery for 30 yards.

The Jaguars are looking for redemption as they travel to play UAB Saturday for their fourth game of the season.

The Bobcats were handed their third loss of the season by SMU, falling 47-17. The team only rushed for 16 yards, but passed for 225 yards. Junior quarterback Jensen Gresch led TXST with 185 passing yards as well as a touchdown, but also threw an interception and was sacked five times.  On the defensive side of the ball, senior linebacker Bryan London ll logged 10 tackles on the night, including two and a half tackles for loss.

The Bobcats are looking to break their three-game loss streak as they host Georgia State in their first conference contest of the season.

In a close battle, Troy fell to a 1-1 record after losing to Southern Miss 47-42. The Trojans only rushed for 24 yards, but threw for just over 500 yards. Senior quarterback Kaleb Barker threw for all 504 yards on the night, as well as throwing for four touchdowns. Sophomore running back DK Billingsley led Troy in rushing with 41 yards as well as rushing for a touchdown. Defensively, sophomore linebacker Carlton Martial had an impressive game with 16 tackles, including four and a half for loss.

The Trojans will be traveling to Akron, Ohio Saturday to take on Akron in their third game of the season.

The Warhawks had a bye week to recover from their close loss to Florida State, where they took the Seminoles into overtime and just loss by a single point, 45-44. ULM rushed for 178 yards and threw for 241 yards, while having five total touchdowns. Senior quarterback Caleb Evans threw for all 241 yards and two touchdowns, with a long of 33 yards. Evans also rushed for 39 yards and two more touchdowns. Defensively, fifth year linebacker Chase Day had an impressive game where logged eight tackles against FSU as well as an interception.

The Warhawks will be back in action Saturday as they travel up north to Iowa State.