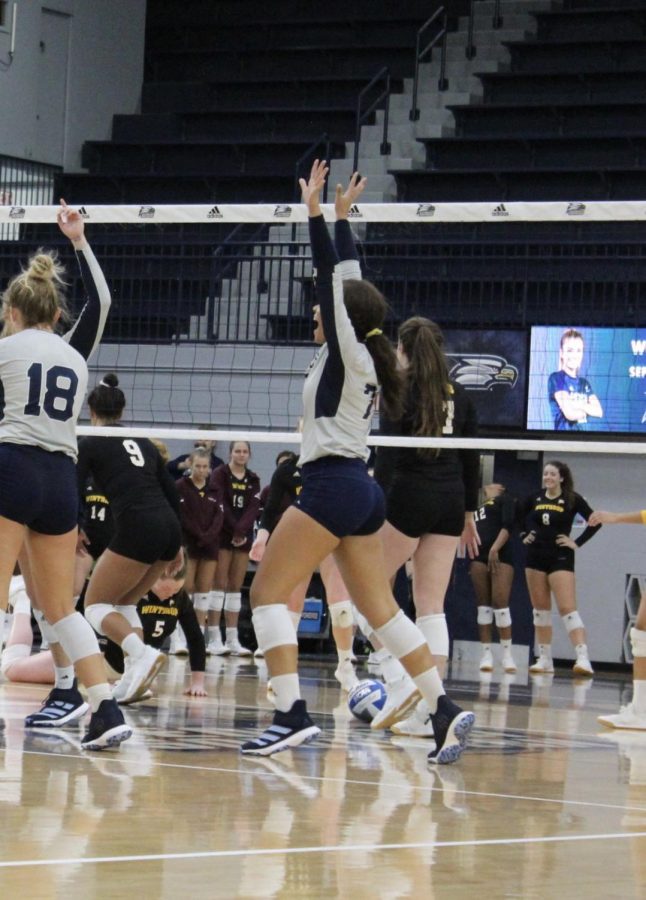 Wilson made her collegiate debut against Campbell where she notched seven kills in three sets.

After a 9-22 record in the 2018 season, Athletic Director Tom Kleinlein decided it was time for a change in Georgia Southern volleyball’s performance and administration. New Head Coach Chad Willis was hired away from rival App State in January of this year.

One of the benefits to this change has been the addition of freshman Mya Wilson, an Orlando native who agreed to attend GS after her conversations with Willis and assistant coach Taylor Sherwin, who Willis brought from App.

Sherwin sold her on their vision for the future, and present, of Eagle volleyball. Wilson was originally committed to Bucknell, a Pennsylvania college of roughly 4,000 kids.

Ultimately, she veered away from the school because she wasn’t feeling that small school vibe. The decision was for the best because she couldn’t be happier with being a Division I athlete at GS.

That decommitment brought her in contact with Willis and Sherwin, who Wilson credits with giving her a vision.

“[They] changed my perspective on what is was to build a program,” she said. “Coming from where these girls were last year and making something, I really wanted to be apart of what they were trying to build.”

Growing up, Wilson danced for much of her childhood until her height clearly became a limiting factor. At the age of 12, her parents pushed the oldest of their three kids to one of two sports.

She had to choose between either rowing or volleyball, as those had the greatest odds of collegiate opportunity in her area.

Much of Wilson’s skill set is thanks to the two academies that helped her fall in love with the sport, Orlando Volleyball Academy, her very first club and teacher, and eventually to Top Select, which she says was “the best decision of my life.”

She credits the staff with really accelerating her learning curve and passion and gifting her with the ability to harness her skills into the position she has today.

The traditions of GS have kept Wilson’s love of Statesboro and what she does. That college-town comfort has helped the young player carve out a role that has her third on the team in kills.

The potential of this group is what really excites the team-focused aspect of Wilson, who constantly deferred questions focused on her individuality and success to matters of team, coaching, and group desire.

She loves the way the team comes in and just gets after it every day in practice, and appreciates the drive and intensity from the coaching staff. She feels as though the team as a whole has really started to buy into Willis’ vision, and that the future is bright in this season and beyond.

“I just can’t wait for us to figure out how good we actually are,” she said. “I feel like a lot of what’s holding us back right now is just from a confidence standpoint…Once we realize the amount of talent and how deep we actually are as a team, we’re really gonna get to where we need to be, and once we have that extra push, we can really just take off.”

She expects success not just in her next three years, but in a 2019 where much of the Sun Belt will view GS as weak.

After hopefully achieving the success she’s aiming for, the communication studies major wants to enter sports broadcasting and journalism. Her dream is to report for ESPN, and she, like many athletes and youth, Wilson says she has been around sports her whole life and can’t imagine being without it.

The freshman looks forward to making her mark in the record books, as she has already made a big impact in the first few games of the season.