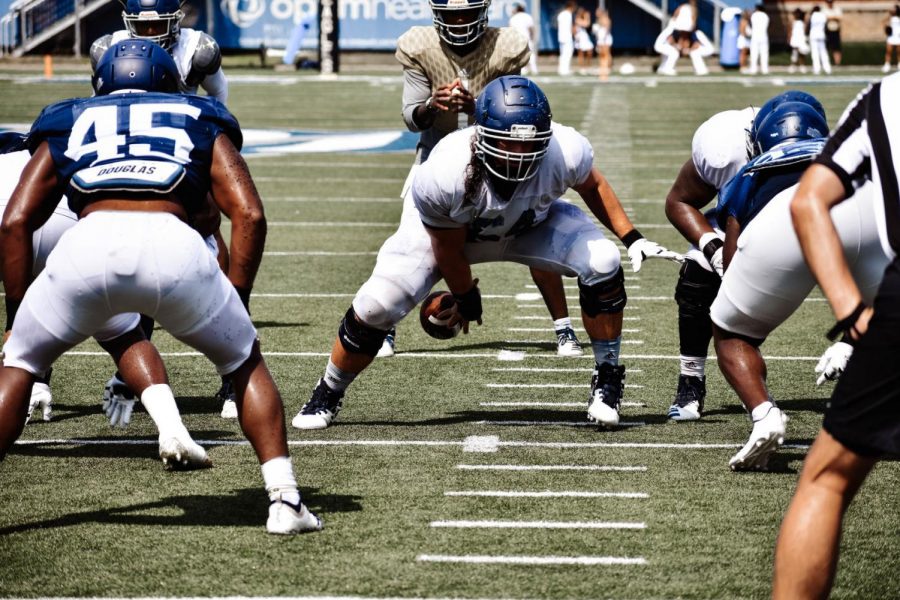 The Eagle offense put up seven different scoring plays on the defense during the second scrimmage of the preseason.

The Georgia Southern football team were successful on both sides of the ball at their second preseason scrimmage on Saturday.

This being their first time competing in front of a crowd since camp started, the team definitely showed out. Offense put up seven scoring plays, while the defense managed four sacks and forced a fumble.

A defensive name that stood out was redshirt-sophomore ILB Reynard Ellis. Ellis played his freshman year at Furman, but transferred to GS last season. Per NCAA rules the linebacker had to sit out his first season as an Eagle. This being his first season eligible, Ellis has already stepped up and done great things on and off the field.

“I really like Reynard,” Head Coach Chad Lunsford said. “He did a really good job of embracing his role last year because of what he had to do and now he’s come up and stepped up because now it’s his time. That’s another next man up mentality type thing. We lost a good player in Tomarcio Reese and now he’s stepped up and trying to fill that role. I think he does a good job off the field and I know he does a good job on the field. We’ll continue to work with him but I really expect big things out of him.”

While the offense is looking strong, they have encountered a minor setback as redshirt-sophomore right tackle Brain Miller suffered an injury at last Friday’s practice. Miller started all 13 games last 2018 season, being on the field for 659 offensive snaps.

“It’s next man up,” redshirt-senior OL Jakob Cooper said. “Brian suffered a bad injury, but he’s in good spirits. We all got to talk to him and he’s supporting us like we’re supporting him.”

The Eagles will begin season play Aug. 31 as they take on Louisiana State University in Baton Rouge, Louisiana.