Reflector Magazine wishes to celebrate the lives of Statesboro’s coolest pets (because let’s be honest, people are just the worst). 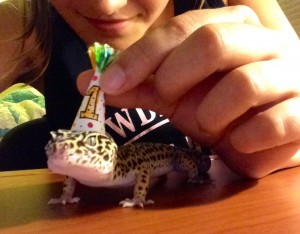 This is Reggie (Reginald) Elwood. He’s a one-and-a-half-year-old Leopard Gecko. When Elwood got Reggie, he was a month old and immediately caught her eye because he had blue eyes and toes, which isn’t too common of a feature. As he got older, the blue went away, but his little charismatic personality didn’t!
Sometimes when Elwood plays the ukulele or piano, Reggie will come out from hiding and hangs out on his warm stone until she stop. He enjoys looking out of windows and is very well traveled. Road trips were not his favorite thing at first, but he’s made it all the way from Savannah to Chicago and back. 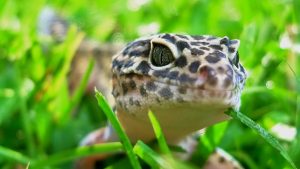 His hobbies include sleeping (nocturnal), eating crickets and worms (wax worms are his favorite), wiggling through the grass, and exploring anything that he can squeeze his little self in between. He’s also very photogenic and doesn’t know it, but is pretty famous on Facebook and Instagram. All and all, he’s a pretty happy little guy! Or, at least Elwood thinks so… he’s always smiling!
Reggie is owned and loved by Meg Elwood, a sophomore multimedia journalism major.
Want your pet to be featured next week? Send us your pet’s biography and adorable photos to [email protected]
Delete Image
Align Left
Align Center
Align Right
Align Left
Align Center
Delete Heading