By: Kat Shuman, Kurt Hanlon, and Alex McCray
The quick and dirty of entertainment news and trends you need to know.
Zayn Leaves 1D
Zayn Malik, caused worldwide heartbreak after he announced he was leaving the One Direction. He announced this news on the official 1D Facebook page, and added that he would not be finishing the On the Road Again tour either. Fans everywhere expressed their devastation all over social media with the hashtag “Always In Our Hearts Zayn Malik.” 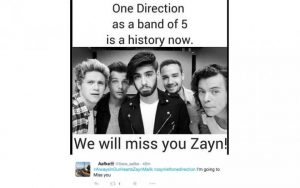 Trevor Noah is taking over “The Daily Show”
ICYMI Trevor Noah, a South African stand up comedian, is replacing Jon Stewart on The Daily Show. We know what you’re thinking….who is Trevor Noah? And you’re not alone, the internet exploded in confusion. We did some research, and turns out, surprise, he’s pretty funny!

Cyrus has no teeth?
Miley Cyrus recently had five of her teeth pulled. How do we know? The star posted several pictures of herself, her teeth, and the friends who took care of her after the surgery on Twitter and Instagram. Thanks, for sharing Miley but as usual that was TMI.

Instagram
“Super Troopers 2” begins crowd funding campaign
According to The Verge, the minds behind the 2001 comedy “Super Troopers” today announced plans for a sequel, and that they will be crowd funding the film through Indiegogo. With a script in place, the team now needs at least $2 million by April 24 to start production on the film. No goal means no movie.
The group his offering a wide variety of perks for donors, including t-shirts and tickets for the theatrical release. More generous donors will get to attend a Beerfest tournament with the cast, or a (legal) cannabis fueled trip through Colorado.

www.comicvine.com
Downton’s Final Season
It has been announced that “Downton Abbey” will be ending with season six this year. After five great seasons, the show will have one final season to wrap up the story of the Crawley family. Unfortunately, many fans and cast members saw the end coming.

giphy.com
“Game of Thrones” meets “Doctor Who”
Maisie Williams who plays Arya Stark in GOT will be featured in the next series of Doctor Who. We’re fangirlling too.
Williams said in a statement,“I’m so excited to be working on Doctor Who as it’s such a big and important part of British culture. I can’t wait to meet the cast and crew and start filming, especially as we’ll be shooting not too far from my home town.”
giphy.com