The quick and dirty of entertainment news and trends you need to know.
Madonna Keeps On Shocking
Madonna fulfilled her apparent lifelong ambition to kiss Drake, this weekend at Coachella. Madonna made her guest appearance on stage as Drake performed the track ‘Madonna’ from his latest album (“If You’re Reading This It’s Too Late).
After Madonna sang two of her own singles, she impromptu planted a kiss on Drake. From the look on his face, it was clear the love session wasn’t planned.
We can’t blame the singer for taking the chance while she had it. Here’s to you Madonna.

vine.com
More Royal Baby Updates
Prepare yourself, the second royal baby is on the way! Kate Middelton’s expected birth has been revealed by a close source. Royal baby number two is expected to make its grand entrance to the world on April 25. Middleton will have two weeks of maternity leave to “fully enjoy the bonding experience,” according to the international business times. While we still don’t know for sure if a princess is on the way, we can only hope. Britain’s are said to be favoring the name Charlotte if it is a girl.


SNL Takes on Hilary Clinton
You know you’re officially a presidential candidate when you get impersonated on “Saturday Night Live.” Kate McKinnon impersonated Hilary Clinton on last weekend’s SNL with plenty of aggressive lady and cell phone misuse jokes. Bill wasn’t left out either, Darrell Hammond impersonated President Bill Clinton who joined Hilary for her presidential bid announcement. “Buckle up America because the Clintons are back!”
Rebel Wilson Continues to Live up to Her Name
Rebel Wilson took to the MTV Movie Awards to promote body positivity and talk about the upcoming release of “Pitch Perfect 2.” Dawning leather leggings with the word “THINK” across the backside, a Victoria’s Secret classic bedazzled black bra, and infamous angel wings. “I think one of the good messages in the movie is that you’re all beautiful. I think sometimes girls look at Victoria’s Secret models and think that they have to model themselves after that, but I really don’t think that’s the best, even though they are called ‘models,’ they’re not the best people to model yourself after. I like to encourage girls to think, which is why I put that on my butt. It’s really about what’s up here [points to head], and not what’s here [points to backside],” said Wilson. 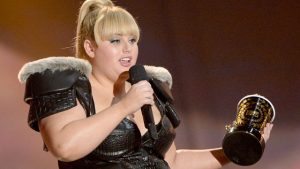 eonline.com
Justin Timberlake is a father
J-Tim and wife Jessica Biel welcomed their first child, Silas Randall Timberlake into the world just a few days ago. The couple first announced their pregnancy on Instagram in January. 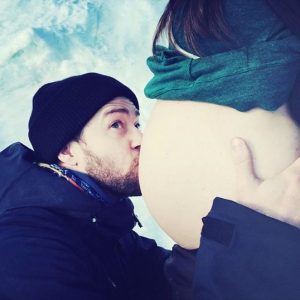