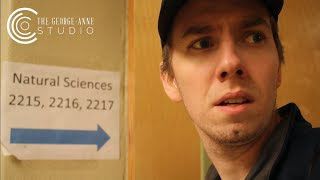 What do you think of when someone mentions David Bowie? Do you think of Ziggy Stardust, one of David Bowie’s legendary personas, or songs like “China Girl” and “Let’s Dance”?
David Bowie has come to the forefront of people’s minds with his recent passing. His artistic endeavors have embedded him in pop culture in the United States and abroad. Bowie means something different to each person, including several local musicians in Statesboro.
All About the Theatrics
Dr. Matthew Fallin, percussion professor in Georgia Southern’s music department, said that one of Bowie’s biggest contributions to culture was the idea of theatrical pop music. “The theatrics became a big part of his concerts, and they are associated with his music,” Dr. Fallin said. “A lot of people followed suit after he started doing that. Bringing theatrics into the show was something he innovated on. Rather than just a musician or band standing on stage playing the music, he became different characters when he performed, like Ziggy Stardust.”
Dr. Fallin listed some of the musicians that believed were influenced by David Bowie’s theatrics on stage. Fallin named artists like Alice Cooper, who used macabre theatrics in his shows. Fallin also listed Freddie Mercury, Queen’s lead singer, and Elton John as influenced by Bowie for the eccentric personas and stage shows that they would put on when they performed.
[quote]Dr. Fallin said, “Musically, I’m trying to find a word to describe him. I don’t know if you can be deep and whimsical at the same time, but those two words come to mind.”[/quote]
Fallin described Bowie’s music as heavily using allusions and not saying something exactly. “He’s not going to paint you a picture of a dog. He’s going to paint you a picture that kind of resembles a dog. He’s not always coming out and saying exactly what he means. You have to dig in there and get the meaning behind the words.”
An Innovator and an Inspiration
Lee Guentert, the drummer from The Orange Constant, said that David Bowie has had one of the longest careers in music of anyone living today. According to the About page on David Bowie’s website (http://www.davidbowie.com/bio) , Bowie’s music career began in 1966!
Guentert said, “In a lot of ways, he’s been an influence on pop culture as a whole, but also a lot of the more obscure genres. He’s one of the only artists of superstar status that’s literally crossed that threshold.”
“The fact that he can bring theatrics and bend so many genres to create his own unique sound is a really big influence on us. What The Orange Constant finds appealing about him is that he seeks to innovate with every album he makes. He seeks to reinvent himself, and we find that inspirational, because we have difficulty labeling our music and classifying to a genre. We appreciate the fact that he wants to innovate himself, and is not restricted to one genre. That gives us the confidence to write music that is also hard to classify, and take pride in that.”

[quote]Guentert said, “His lyrics are very inspirational. They kind of take you out of where you are in life at the moment. They are very escapist. A lot of the albums are that way, and I mean that in the best way possible. When I listen to that music, I can be transported to another dimension, specifically the album Ziggy Stardust. I love the fantastical element of him. But then, at the same time, he is so multifaceted that he can write songs that make you want to dance and are a lot more down to earth.”[/quote]

His Own Person
Scott Underwood, the drummer from Those Cats and PIANO., said that he has been influenced by David Bowie for a long time. “Most of the groups I’ve ever been, unbeknownst and not purpose, we’ve always covered a song by him. Now, looking back, and everybody talks about their influences after his death, it’s apparent how he transcended genres. Every band I’ve been in has been different, but we’ve all still had the common thing to go back and cover Bowie.”

When asked what characteristics of Bowie’s music influenced him, Underwood gave a surprising answer- saxophones. Underwood said that he has been in several bands with saxophones in them. Bowie’s music toward the 1980’s took on a funkier sound, and that era of Bowie’s music has influenced Those Cats.
PIANO. draws influences from Bowie’s album Diamond Dogs, one of Bowie’s more rock-sounding efforts. Underwood said, “It’s actually based on 1984, the Orwell novel. Each of his albums are so different, it’s like subconsciously, you go back and cover a song by him and you realize it fits the genre of whatever band you’re in.”
Scott Underwood said that David Bowie’s fearlessness was one of the most inspirational aspects about Bowie.
[quote]“He created a safe landscape to try things and push. Bowie was a champion of pushing limits and not adhering to social norms or popular music trends. He was his own person, very much so.”[/quote]

David Bowie pushed the limits of what was normal in the music industry and pop culture.
Bowie continued making music as he got older, releasing the album Blackstar on January 8, 2016, only two days before he died. Underwood said, “Bowie was a renaissance man. He acted, he put together some Broadway shows, and he was obviously a great musician. He was an artist’s artist. It consumed him to the end. It is cool and creepy in a way how his last album was kind of like a goodbye.”