Young is Not the Same as Healthy

I’m 20 years old. I’m young, I live a relatively active life. I’m not the most athletic or sporty person but I do spend a lot of time walking around our ginormous campus or running back and forth between tables at my waitressing job. Recently I’ve gotten into the habit of carrying a water bottle with me wherever I go. I don’t take any medications. I floss. Most people would say I’m healthy, right? Wrong.
While those are all great things for me to do for my physical and overall health, that’s not all there is to it. Sometimes health can be completely out of our initial control.
For as long as I can remember, my mother has had high cholesterol. It’s been that way for so long, she actually has deposits of cholesterol under her eyes that have steadily been growing ever since her metabolism began to slow down. She could no longer eat like she was 25 and apparently, she couldn’t even when she was 25.
After realizing my family history, I decided to go ahead and get myself tested and guess what – I have high cholesterol. 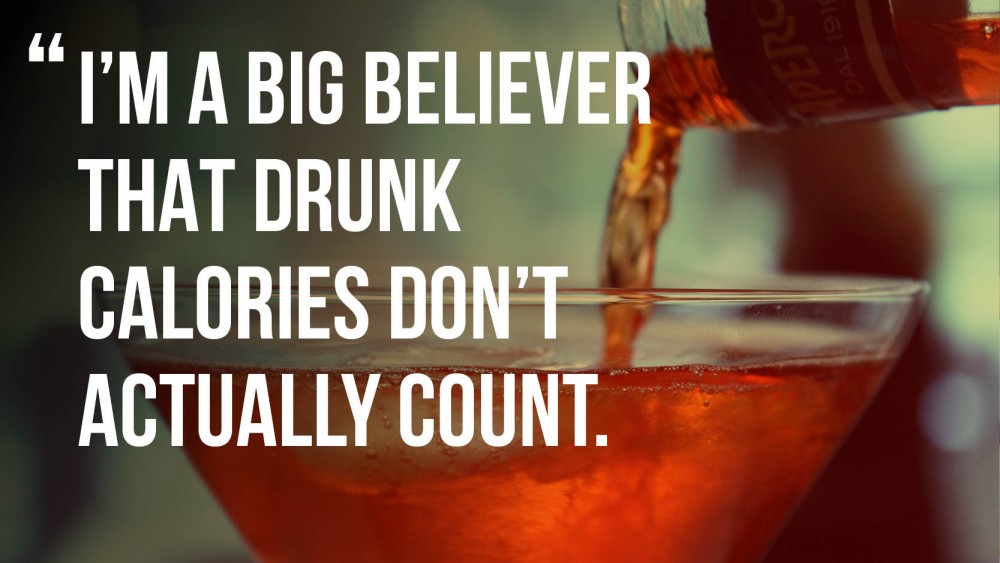 unsplash | Jeff Licciardello for Reflector
You’d never know by looking at me. Most people associate high cholesterol = overweight. I’m actually in a very healthy weight range for my age/height. But I eat like crap. My diet includes a lot of fast food on campus or in between class. I’m a big believer that drunk calories don’t actually count. Carbs are actually a food group in my opinion.
I always figured since I was young, I could get away with it. All knowing mothers would remind me I wouldn’t have this metabolism forever. My reaction? Might as well enjoy it while I have it. I mean, yeah, like every self-critical person I always think I could stand to lose five pounds, but I also don’t feel the need to shy away in a bikini. So I was good, right? I could worry about healthy eating later in life, once my metabolism really did start to slow down or after I had kids or whatever. That was a problem for then.
Except that is such dangerous thinking.
I’m putting myself at a much bigger risk for heart disease or stroke, especially if it builds for years over time. Those deposits my mom has on her face? I already have one budding under my own left eye. These are actual real-life risks.
I could easily sit back and say “screw it,” blame it on my genetics, take medication and change nothing. But at some point I have to recognize that I am responsible for my own actions and while my circumstances may be bad, my choices can make them better.
Recently I wrote an article about the Paleo diet and interviewed a fellow GSU student, Roy Williamson, who also decided to make some changes after realizing his current lifestyle wasn’t doing him any favors. He made a drastic change in his diet, lost a significant amount of weight, and continues to make healthy choices even after seeing the results he desired. Ultimately, I had to recognize I needed to do the same.
So me, the girl who eats Chick-fil-A a solid 3-4 times a week, adds steak and extra queso in her burritos and works in a Mexican restaurant that serves arguably the best chicken nachos in the country, was ordered to cutout the amount of animal fat in my diet by at least half.
I learned to view it as a positive thing. Instead of thinking I’m denying myself food, I’m simply choosing it for another day. Two days a week I don’t eat any meat at all. This isn’t something I plan to continue forever, but I figure to get the initial issue under control it would be a good way to start. Another two days a week, if I do eat meat, it’s chicken or fish and only grilled or baked. Nothing fried. Another big change for someone who’s usual fallback is hitting a drive-thru late at night rather than the grocery store.
Now that does leave me with three days a week I can eat fast food, red meat or fried foods. That’s still not super healthy but I have to measure my expectations to what I can accomplish. I can’t expect to go from eating fast food five days a week to not even remembering what a chicken nugget tastes like because I’m loading up on salad and kale. 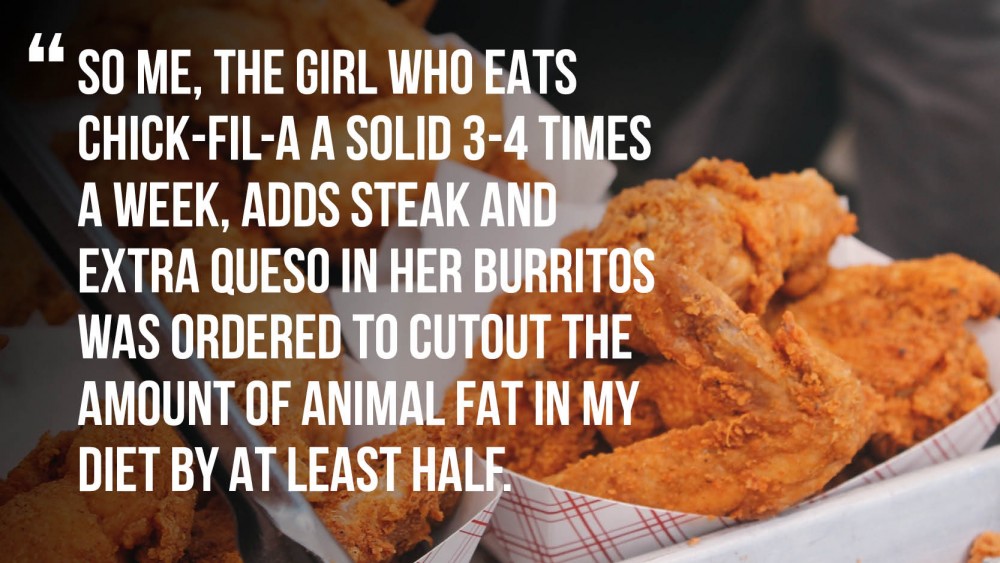 unsplash | Jeff Licciardello for Reflector
I also learned to embrace healthy foods. I pinned a ton of recipes for chicken, seafood, vegetables and alternatives to butter, etc. And actually, I can’t complain. A lot of it is pretty yummy and if I budget it right, I’m not spending anymore than I was before at the grocery store. In fact, I’m probably spending less since I’m cutting out the drive thru.
I chose not to go on medication to control my cholesterol. While it is recommended for some, my circumstances weren’t quite severe enough. My doctor assured me that changes in my diet and level of physical activity should be enough to get things under control. In six months, I’ll go back and get re-tested and hopefully it will have all paid off.
The purpose of this post isn’t to brag about myself or anyone else. The purpose is to encourage people to pay attention to their health now. It’s strange to think of an almost-21-year-old having cholesterol-related health problems but it’s not unheard of. Case in point.
The other purpose is to encourage people to take control of their lifestyle and make sure they’re taking care of themselves for the better. Being young is no excuse for not caring. Youth does not always equal health. We’re all smarter than that and we’re definitely a lot better than that.