Qualities of an Attractive Person 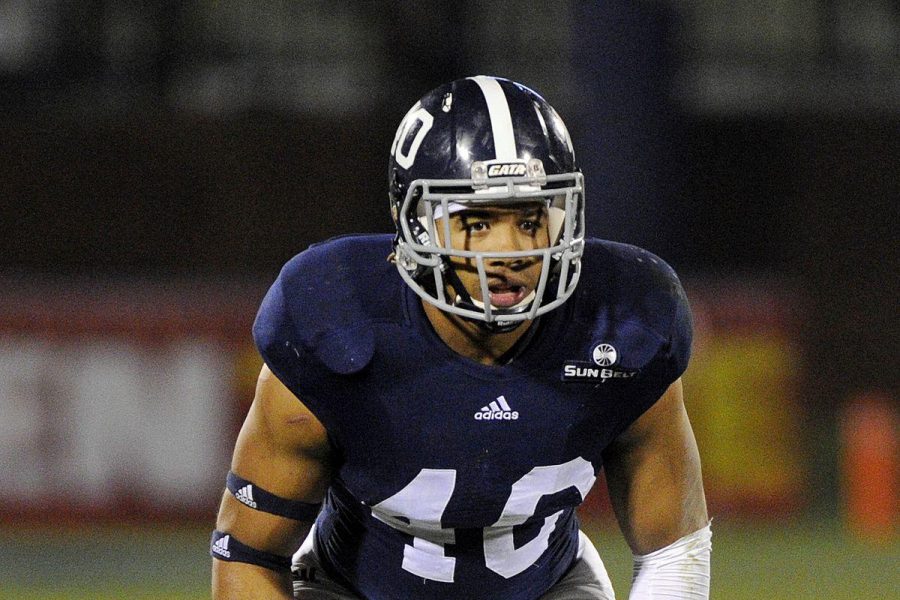 Former Eagles and Colts linebacker Edwin Jackson died Sunday morning after being struck by a suspected drunken driver along Interstate 70 in Indiana. Photo by Todd Bennet.

“Beauty is in the eye of the beholder.”
You may have heard that quote somewhere, sometime in your life. Maybe your parents or grandparents told you that. Perhaps someone older and wiser might have scolded you for thinking superficially. Either way, everyone perceives beauty differently and that’s perfectly fine! However, when it comes down to one’s ideal type, they are bound to be different from their neighbor’s ideals.
Isaiah “Zay” Crowder, junior electrical engineering major, was asked what he thought were physical traits of an attractive person. “First of all, she gotta have cute eyes,” Crowder said. Crowder added that he does not mind much if a girl isn’t top-heavy, “but I like a fat booty!”

Nicholas Carter, also a junior electrical engineering major, seems to care about physical qualities in a different way. He described a physically attractive girl as having “groomed hair, decent skin, and… an athletic or fit body.”
Both men were asked on their personal opinions if they thought a girl wearing makeup was attractive or not. Crowder responded, “I don’t like makeup.” He further elaborated that he personally felt makeup hides who a girl really is; she may not have that perfect airbrushed skin or bubblegum pink lips he thought she would naturally have. “When you take off your makeup, you won’t be who I thought you was [sic],” Crowder said. He prefers all-natural, bare-faced girls over a full face of makeup.
Carter has similar tastes, albeit more lenient. “As little as possible. If you look like a clown, that’s not cool,” Carter said. A little eyeliner here and lipstick there does not bother him, but he also prefers girls not to have a full face of makeup.
Deja Toombs, a freshman studying music performance and psychology, was asked what her ideal man’s physical ideal traits were. “When the overall personality stands out, then the appearance really doesn’t matter to me,” she said. She added that physical traits are not the first thing she looks for in a guy, although she doesn’t brush it off completely.
“I believe an individual is attractive by the very mere reasoning of keeping up their morals and values, especially as a college student whose decisions are contingent upon peer pressure or acceptance,” Toombs said.
All three students unanimously agreed that good hygiene is one of the most important traits an attractive person must have. “Hygiene over looks!” Carter exclaimed. He would rather have a girl who keeps up with her hygiene more than her looks than a girl who cares more about her looks than her personal hygiene. Toombs expressed her turn-off is when someone has bad breath. However, Crowder is unwilling to trade hygiene or looks for the other.
“If a girl looks good and smells good, that’s great. You can’t have one or the other; no compromise,” he said.
When it comes to overall attractiveness, looking on the inside is just as important as looking for someone who appeals to you physically. Aside from looking great and having an awesome personality, chemistry and ability to communicate effectively are things to take into account when looking at overall attractiveness. Crowder expressed that he wants someone who he can vibe with. “I want a girl that’s on the same mental level as me. I don’t want a girl that’s immature,” Crowder said.
Carter had similar ideas, except that he loved an open-minded girl and one that, “has an idea of what she wants in life… basically responsible. She gotta know what she wants to do in life,” he said. One thing that all three students agree on is that having social skills is part of being attractive.
“She can’t be a turtle,” Carter said. “I wouldn’t care if she had a lot of guy friends. We should be able to trust each other. If she can’t handle that, she gets the boot.”
“I don’t want a shy girl,” Crowder said. “But I don’t want a girl that’s up in everybody’s face… constantly making friends and being overly friendly with guys.”
Toombs prefers a sociable guy who “will still respect boundaries.” While being an outgoing and friendly person sounds great, there is such thing as being too nice to everyone. Perhaps onlookers will get the wrong idea and note the behavior as flirtatious, even if that was not the case.
Many of us have similar ideas of what makes a person attractive and appealing, but there are also differences when we specify our ideal types. Your friend may like a social-butterfly gym freak who often gets around, and you might recoil from someone like that. Everyone has their own opinions about attractiveness, so just try not to judge people whose opinions differ from yours!