Spr(aaaa)ing break. A time for parental sponsored lunacy and unadulterated fun. After not remembering a single spring break for the past seven some-odd years and breaking off a tumultuous relationship with the bottle 10 months ago, I wasn’t sure what to expect from a week without structure. I was excited for the lull in my school work, but not exactly giddy about going back home. It was time to act like Christina Aguilera and get back to basics. For fans of the uneventful and the trivial, this recap is for you. Let’s break down a week of free time for a recovering degenerate:
Part 1: First weekend & Homeward Bound
I’m a pretty hardcore dude. I put off projects until the day or two before they’re due. As a result, I had the blessed opportunity of sticking around in Statesboro until Monday to finish up a multimedia project. It was electric. I’m talking sleeping in until noon all weekend and walking through an empty campus to get some old-fashioned keyboard-and-editing time in the Henderson. Being the purebred workhorse that I am, I breeze through that pup right as the library closes on Sunday. The maintenance and janitorial staff on campus cheered me on as I made my way to my car, throwing up a heroic Rocky Balboa fist as I climbed into my clean 2008 Nissan Altima. Time to 23 skidoo.
Part 2: The Meat of the Break & Full Blown Panic Attacks 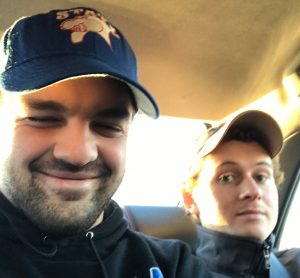 Waking up late, I gather myself, pack my car, fill up on gas, and start my long journey to North Georgia. I crack open an ill-advised Starbucks Doubleshot Espresso drink and hit the road. This turned out to be my ultimate downfall. Now I hadn’t drunk caffeine in over a year at this point and I almost forgot why until I took two sips of that devil’s brew. The tingling starts in my legs and spreads to my face, my chest grows tight, my vision blurs, and whatta ya know? Poppa is back in business baby; we’re having a full-blown panic attack on I-16.
After five and a half hours of checking my pulse I finally get home. Sanctuary. I meet up with my old crew and get to bed late, only to have an unceremonious wakeup call. I’m thrown awake in terror as a squealing in the kitchen rips through the house at 6:30 in the morning. My stepmom and my father are making morning smoothies and chatting up the day’s plans feet away from my makeshift storage-closet bedroom. Naturally and thoroughly enraged, I begin to pack up my belongings to storm back to the Boro, but decide to stick it out to see my little brothers. It’s all about the kids.

Basketball is pretty much the only athletic hobby I enjoy so my days on break were filled with hitting the local Forsyth county courts and taking high schoolers to church. My jump shot was my steeple and my crossover was my sermon. There were no handouts. It was medieval. At nights me and the crew would sit and reminisce about the old parties we threw or the girls we used to know, smoking cigarettes in a dingy garage until dawn. A quarter of us are clean, half are off in the military, and the other quarter are too far gone to be reached for comment.

We watched reruns on cable TV and tried to balance on a broken ladder for hours on end. We are all in our early twenties and the world expects us to produce something of use soon. Fat chance. Tuesday night, on a bet, I ate a napkin while a room of a dozen people cheered me on. No water and little remorse. I’m a grown man mind you.
Thursday night I decided to try out my standup set at an open mic night in Marietta and my panic attacks decided to tag along. A woman who just filmed her HBO special goes up on stage and blows the crowd away and another has people laying on the dirty lounge floor crying with laughter. I’m skiing in roller skates. I’m out of my element. Numb-handed and short of breath, I take the stage around midnight and my set falls apart faster than Robert Durst’s alibi. A Dexys Midnight Runners reference falls on deaf ears and my grimy humor gets little more than a few emphatic sighs. I walk out of the building into the cold nighttime air hoping to burst into flames like a vampire at daybreak, but alas, I have to live with my performance. Life moseys on.
The next night the gang and I go see Logan and it really sticks with me. Why do I care so much about Hugh Jackman? Wolverine has had little to no impact on my life up until this point, yet why do I feel shattered inside after the movie? My emotions run wild. We all stay up watching standup specials until the sun rises and I chain smoke in a green jealous rage at the comedians success. I balance on the broken ladder for six seconds to much critical acclaim. This was my magnum opus.
Part 3: Requiem for the Break
After a weekend of watching the NCAA tournament, I head back to my abode in Statesboro. I hug my family and friends tight and tell them I’ll be back soon, with the mutual understanding that I won’t. I go 400 to I-85 to I-75 to I-16. Not even considering stopping until I put hundreds of miles between me and those goons back home. When I pull back into my apartment complex I kiss the ground and thank the stars for keeping the panic attacks at bay during my drive. I put my belongings away and sat down with a tray of tater tots to watch the last game of the weekend. This was my release.