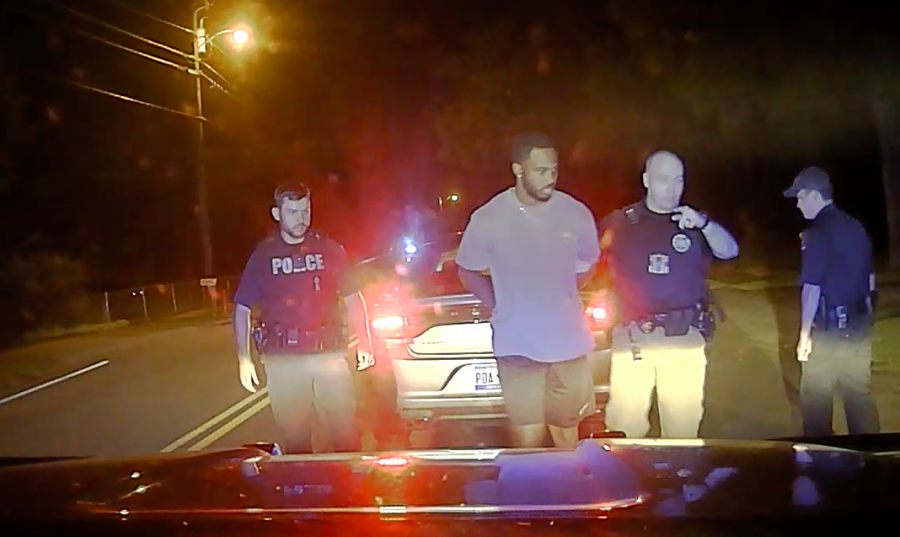 Georgia Southern quarterback Shai Werts (grey shirt) was arrested for speeding and possession of cocaine July 31. Footage of the arrest was made available Thursday.

SALUDA, SC — Through a FOIA records request The George-Anne was able to view the footage of Georgia Southern quarterback Shai Werts’ arrest from July 31. The video was shown by Chief Deputy Toby Horne in his office at the Saluda County Sheriff’s Office Thursday.

Because it’s an ongoing investigation, they were not able to release the footage until later Thursday afternoon.

Werts was driving from his grandmother’s apartment in Clinton, South Carolina on the night of July 31 when he was pulled over for speeding.

Before being pulled over, officer Charles Browder III had his lights and siren on for nearly five minutes before Werts stopped his car. A city officer was driving with his blue lights on towards Werts and Werts pulled to the side.

“If he had pulled over, he’d just have gotten a warning ticket,” Horne said while watching the tape.

Browder had Werts step out of his 2016 silver Dodge Charger and asked if he knew how fast he was going. Werts didn’t know.

The two went back on forth about how fast he was going. He was going 78 mph, per Browder.

When asked about why he hadn’t pulled over when he saw the lights, Werts said that he had been told not to pull over until they were in the light.

After a minute of allowing Werts to explain himself, Browder cuffed him and put him in his SUV.

“Can I call my momma?” Werts asked.

“No. You can’t call anyone til you get to jail,” Browder said.

Browder and two other officers then searched Werts’ car. Werts driver license and Eagle ID were shown in the front seat, along with some clothes, a yoga mat and two bookbags in the back.

The officers then shined light on the hood of the car.

A slime-like, white substance was shown and the officers were visibly perplexed. Browder headed to the trunk of his car to pick up a NARK field test kit.

“He threw something out,” Browder said. “He had to have.”

The officer then took a sample of the substance and put it in the little test kit and shook it.

After talking with the officers, Browder headed back to the back seat of his car to talk to Werts.

Browder: “What’s that white stuff on your hood, man?”

“I swear to God, it’s not. I just tested it and it turned pink.”

Browder then slammed the door on Werts and proceeded to the Charger again. The officers took pictures on their phones and then Browder took a few pictures on a digital camera.

The substance took over three quarters of the hood and the officers continued to show looks of shock. Horne said that all the officers were obviously astonished.

“Unless the bird inhaled cocaine,” Browder said. “I’m not sure how to wipe this stuff up.”

The officer managed to wipe it into an evidence bag. Then he gave Werts another opportunity to talk.

Werts explained that he tried to get it off at the gas station with the self cleaner with water, but it didn’t come off.

“He could’ve been telling the truth, but it’s on his car,” Browder said.

Browder read Werts his Miranda Rights and then walked to the front of the car. Then the camera shuts off.

Horne explained that on Wednesday, he had given copies of the footage to the solicitors and the defense attorney.

“I burned disks for the solicitors and I burned a disk for the defense attorney and gave them to them first thing in the morning,” he said. “When I say first thing, I was there before the courthouse opened. It was already done. I was waiting on them at the door.”

Now it’s a waiting game for all parties involved. Horne said that the test kit containing substance from Werts hood was sent to SLED (South Carolina Law Enforcement Division) Wednesday. The results usually take about 30 days to come back.

Horne said that the process could be expedited based on the situation.

“It tested positive with the kit. Have there been false positives before? I’m sure there has been,” he said. “Until that test comes back, I can’t tell you what’s on the hood of the car. I can tell you that the test kit came back positive for cocaine. But whether that’s what the substance is or at least some of it, we can’t tell you.”

Werts’ attorney, W Townes Jones IV, was reached for comment, but has yet to respond. Werts has been participating in GS football practices since Sunday.