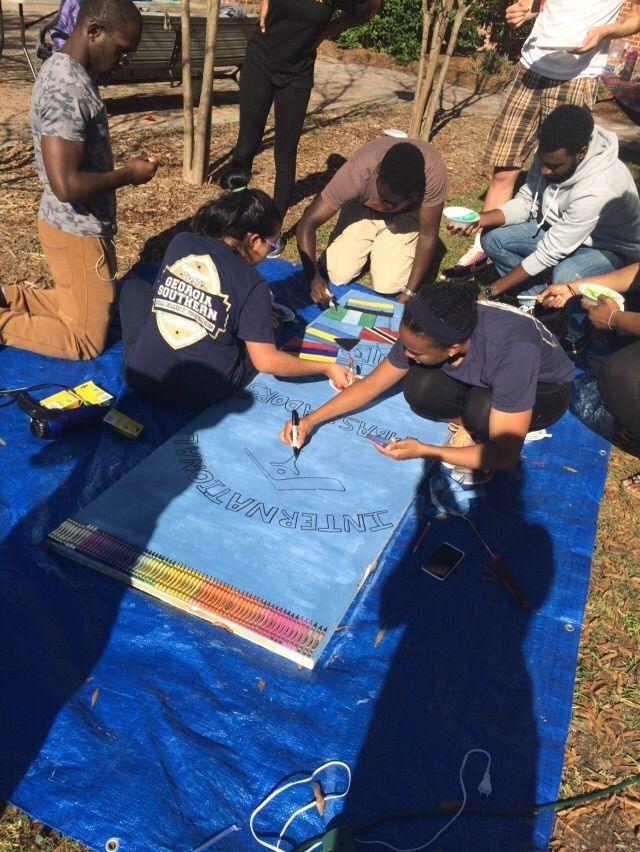 Georgia Southern University student Megan Manning suffers from anorexia nervosa. She was diagnosed in 2009 while in sixth grade and began receiving treatment at a psychiatric ward in her hometown of Augusta, Georgia.

Today, Megan is healthy, and she celebrated her 10th anniversary of recovery this year. But despite her good health today, she still struggles with unhealthy tendencies as a result of her eating disorder.

This is Megan’s story, in her own words – the words of someone who survived harrowing experiences that many do not. If you or someone you know needs help, please contact the Georgia Southern Counseling Center at 912-478-5541 or the National Eating Disorder Association Helpline at 800-931-2237.

Tell us about yourself.

My name’s Megan Manning. I’m 21-years-old. I’m a senior, a journalism major, and when I’m not in class, I’m doing Kappa Delta stuff, which is my sorority. Most of the time, I’m in class. I love to dance, and I’ve always been a part of my sorority’s dance team.

I have two little brothers. I have a mom and a dad, and they’re still married. They’re very supportive. They’re just the nicest family ever, you know. They’ll do anything for me if I ask them. If I ever needed something, they’d be there for me.

What triggered your eating disorder, or what lead up to it?

It took that whole first half of my middle school year to finally [find] the right doctor, and I actually suffered from anxiety and we didn’t know it.

I guess whenever I went through puberty, my serotonin chemical in my brain didn’t fully develop, and so that’s kind of what caused it. It wasn’t really something that caused my anxiety, but my anxiety caused my disorder.

What sort of treatment did you receive?

How did you feel, being in the ward?

I thought I was gonna die. I was so scared to be in there, getting pills shoved down my throat, getting blood drawn every morning. It was terrifying.

So, when you walk in there, there’s this huge [wall], and it was all steel. You had to have a special password to get in. You walk in, and it’s a hallway, and there’s rooms, and there’s a little tiny kitchen area.

My room was the first one on the right. It had two beds in it because sometimes you shared a room, but there weren’t enough people there, so I had my own bedroom.

I wore contacts at the time, and we didn’t have a mirror in our bathroom because they were scared we were gonna break it and do something to ourselves.

And then you’d go down, you’d see a nurse’s station. There was actually a quiet room, where it’s this huge, safe-looking box, where you’d have to go if you were having a mental breakdown. And then if you go down the hall, there’s a classroom, a therapy room.

How long were you there?

About a month, maybe a little less than a month.

Yeah. At the end of sixth grade in May, I was actually hospitalized for almost a month, because literally, my organs were shutting down. I had such bad anxiety. I was hospitalized and taken out of school and things like that.

In middle school and on into high school, was there ever anything like dieting and counting calories?

Like everybody else, I had Tumblr. And I would go on there and I would just look up the most negative things. I’d literally look up like skinniest people or people with anxiety, things like that.

And it’d come up with lists and pages and pages and pages of a person looking at a scale, someone being so tiny, and people were like, “Yes, girl, you’re doing so good, keep going. You can get down to 90 pounds or whatever.” That was my Tumblr feed.

I didn’t so much count calories and things like that, but I danced all through my life. And that’s kind of what I kept up with, because I wouldn’t eat before [dance]. Plus, these girls are stick skinny next to me, me not thinking that I’m stick skinny at this point in my life. I’m like, “Oh, it’s fine. I’ll be okay. I’ll eat some gummy bears, and I’ll be fine.”

When you looked in the mirror, can you describe how that impacted your view, as compared to others?

Even now, I’m like, “Oh my gosh, these love handles have got to go,” just jokingly and things like that. I don’t see what everybody else sees. People are like, “Oh, you don’t need to lose weight,” and I’m like, “Yeah, I do.”

I see these girls, especially on social media, and these girls are literally tiny. I wanna look like that. I wanna be like that. So, looking in the mirror, I don’t see what other people see. I see the worst things.

I look back on pictures and I’m like, oh my gosh, literally, I was skin and bones. I was tiny, and I thought I wasn’t tiny compared to these other dancers that were next to me. It just kind of blows my mind now that I’m healthy.

Living in the South, skinnier people often hear things like, “Eat a sandwich.” “Go eat a steak.” “Put some meat on your bones.” Did you ever receive any comments like that?

Yeah, and I still do to this day. Even though I’m at a very healthy weight, a very normal weight, people are still like, “Oh my gosh, go eat a hamburger, go eat some ice cream.”

And I’m like, you don’t understand that it’s not just about what you want me to eat. It’s all in my head.

You can put a whole spread in front of me, and I won’t touch it. Not now, obviously, but [during my] younger days, I wouldn’t touch it.

Being in the South, it’s also a very negative connotation when you have a mental illness or something. People don’t take you seriously. People will be like, “Oh, whatever, she’s just skinny.”

So, I would get those comments, and like I said, I still do. And it’s kind of offensive because I’m like, you know how hard I worked to get here? And now I’m finally okay with myself?

How did you talk to your boyfriend about it?

I actually have a semicolon tattooed on my ankle, because it’s the Semicolon Project about, you know, you could have ended something but you decided not to.

And so we were just hanging out one day, and he was like, “Hey, I like your tattoos.”

I was like, “What, are you not gonna ask me about them? I would be so curious.”

So I started talking to him about it, and I was like, listen, this is what happened when I was younger, and I still struggle with it every now and then. Every day is not a good day. I have my bad days. When I have my bad days, they are worse than normal people’s bad days.

I won’t eat. I don’t stress eat. I stress starve myself. And he understood. He’s one of the most comforting people you’ll ever meet.

How much of a struggle is your eating disorder today?

Now, I still try to eat healthy. If I see myself getting a little love handle on me, I’m like, “Gotta go to the gym,” or I have to work out, or I need to eat a salad today.

But I’m almost 100 percent. I’ve had such great people in my life who have really helped me. And the eating disorder community is such an uplifting and helpful community with so many resources that you can reach out to and talk to.

I can slip back into those tendencies, but they’re nowhere near as bad as they were. I’m very thankful for it and all the people who have helped me through it.

That’s how I am today. I’m just like any other college kid.

Talk about the community and the resources available.

It’s called the National Eating Disorder Association, and I joined it in high school.

You can reach out to people online or you can meet up with them and they do these walks, which I did one time, and you get to talk to other people who have struggled with similar issues, with eating disorders.

What sort of advice do you have for other people who are suffering from an eating disorder?

Ashton Christianson contributed to this article

This article was previously published in the print Spring 2019 edition of The George-Anne Reflector.