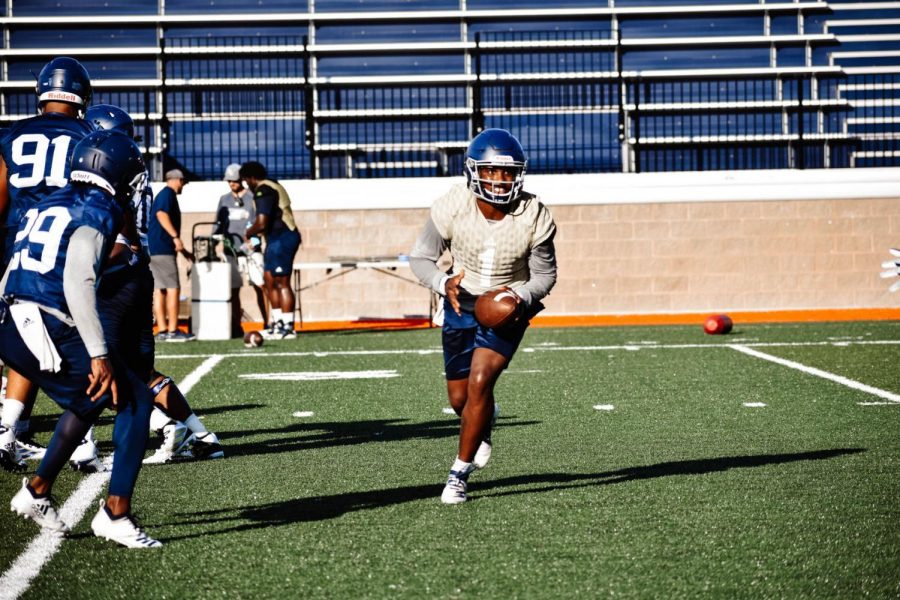 STATESBORO — With only four days until the Georgia Southern season opener against LSU, linebacker Lane Ecton and quarterback Shai Werts took to the podium for the team’s weekly press conference.

Here are some of the highlights:

“It’s been a long time coming. It’s my last go around with these guys. I love these guys and I’m just excited to have the chance to play in a place that’s as historical as Death Valley. We got the Death Valley last year and it was fun to play in, my home state. I’ve heard this one gets pretty rowdy and I know our guys are ready to experience that, go in there and show people what we’ve got.”

On how playing Auburn and Clemson have prepared the team for LSU:

“Football becomes football. When you run out there, everything gives you chills. 100,000 people screaming at you and that hits home for the first play. Once you make contact the first time, football becomes football. So, the way I see it playing in a different place, like playing in Death Valley last year and now playing in this Death Valley, it’s all something that comes back to what we’ve been taught. It could be practice, it could be a scrimmage, it could be a game as big as this, really a stadium doesn’t get to you unless you let it get to you.”

On what the seniors’ legacy wants to be:

“We want to build for years to come. We always talk about leaving places better than we found them…We turned that 2-10 season and we turned it up. We’re making strides to have better seasons to come.”

On how to stop LSU’s offense:

“Turnovers are going to be huge. They’ve got a very explosive offense and they have earned respect across the nation. We have a great defense and we have guys who can make plays and make turnovers, get the ball out, intercept. Just like Clemson last year, what kept us in it was turnovers. Anything we can do to get the ball back in Shai’s hands with the offense so we can put points on the board.”

On LSU moving to a more spread offense:

“It makes it more difficult. If you look, you can find what they should be doing. You’ll see where their coach comes from, who he studied under…we’ve looked at different teams, different stuff.”

On playing as the underdog:

“Oh we think about it, and we expect it. ‘It’s Georgia Southern vs The World’ is what we say. Nobody expects us to be great, but we know the players we have, we know the brotherhood we have and we understand we can go into anywhere and compete.”

“Definitely excited. With our last game being in December, we’re ready to get out there Saturday.”

“They’re very good. They have a very good secondary. They’re fast and physical, but we just have to play Southern football and we should be good.”

On adjusting to the environment:

“I think this might be a little louder (than Clemson) because it’s a night game and it’s their home opener. But we have some stuff that can control a lot of that, so we’ll be fine.”

On getting a fast start:

“That’s with any game, wanting to get out fast. It’s not just because it’s LSU or a Power 5 school. We want to get started off fast on offense any game we play.”

On comfortability in offense:

“I’m real comfortable. I’ve had a spring, a fall camp, obviously a season and then another spring and another fall camp. I feel like I’ve taken over the offense and am now comfortable out there. We’ll see how it is on Saturday, but we’re just ready to perform honestly.”

On being named a team captain:

“It means a lot. I feel like that’s one of the biggest accolades a football player or any athlete can receive is being named a team captain. It lets me know that my teammates respect me as a leader and that really means a lot to me. I appreciate them doing that.”